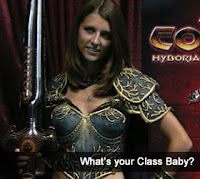 I thought it might be funny to take the various schools of RPG thought and assign them a D&D class, and then determine what class (or multi class) I would be. I'm going to use the four standard classes, fighter, thief, cleric and magic user, but with a little imagination I'm sure something could be figured out for other classes as well.

Old School/The Fighter - The old school grumbling Grognard, heavily armoured, hard to kill and always ready for combat. This group is by far the hardiest of the RPG schools having weathered many storms and seen many battles. But even after many campaigns the old soldier keeps on playing... OD&D.

New School/The Thief - The new school of RPG's "borrow" liberally from their predecessors, but like any good thief deny that they did, or were even there, or were even in the city at time that that happened... I don't know a Gary Gygax, never met him, never... OK...I stole your twenty sided, but you can keep THAC0, no one will buy that shit anymore.

The Indie/The Cleric - The Indie's are the preachers of the RPG world. Always pontificating about the superior quality and clarity of vision in their chosen games and the relative lameness of your "mainstream"and "generic" game. The more obscure the game the more fanatical the devotion... thats a lot like a...cult. YOU WILL CONVERT.

So, what class are you?