February 03, 2009
This weeks awesome pick of the week is from a warhammer concept drawing. I don't know the name of the artist but its from the wild elves concept art on the Games Workshop site. Warhammer has some of the coolest art in gaming, I might even be so bold as to say they might have the best art in gaming. The art is dark and really portrays a gritty world, and if you've ever played the Warhammer RPG you'll know that the game is very dark and gritty.

So here is the awesome pic of the week: 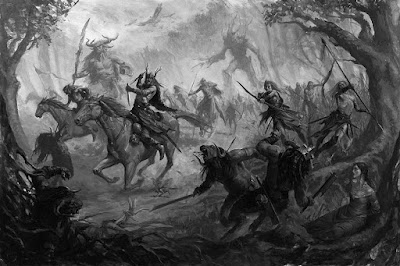 To me this picture is what a crazy fantasy battle should look like. Wild Elves on horses fighting beastmen, while giants and walking trees look on, its pretty awesome. This would be a great scene to reenact in a game, an awesome epic battle in the forest. It makes me want to play warhammer again.

What ideas come to you when see this pic?