Showing posts from October, 2009
Show all

To Dave, Phil, Graham and Danny... Thanks for creating the RPGBN 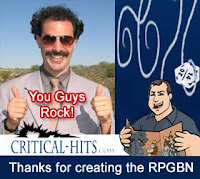 I don't know any of you guys beyond the words on your blogs, but I wish I did - because, after all the shit you've put up with over the last little while I would take all of you out for a beer and some good food. Thanks for creating the RPGBN and through it introducing me to so many blogs that I never would have known about. Thanks for making my blogging life better, easier and more fun. So thanks Dave, Phil, Graham and Danny, you guys rock!
Read more 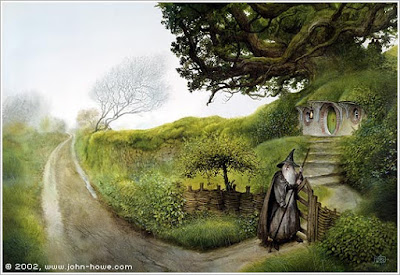 This weeks picture comes from artist John Howe . He is best known for his Tolkien art, but his other works are pretty awesome as well. His depictions of Middle Earth are some of my all time favorites. I find his vision of Tolkien's world somewhat darker than most artists, which is probably what I like most. This is one of my favorite pictures of his, and also the current desktop picture on my computer: Check out John Howe's art for yourself and get some good ol' inspiration for your game.
Read more

Have your PC's suffered enough?

Suffering follows a hero like stink follows a Stench Kow. If you take a look at almost any hero from mythology you have the immediate realization that being a "hero", or for that matter anyone of consequence in history is a pretty shit deal. Not only are there terrible responsibilities and grave decisions to be made, but almost everyone you will ever meet is probably dependent on you in some way or another. So, I guess this begs the question:  If being a hero is so damn shitty why would anyone want their characters to even bother with it? Simple answer,  its a game. You don't have to suffer the travails of your character, but you get to reap all the fun from going through them. What, suffering is fun? Sure is, if its imaginary.Where real suffering sucks, imaginary suffering brings you closer to the character you're playing. We are all bound by our suffering. It is a universal truth and the root of compassion and empathy. So it makes sense that if suffering evoke
Read more

The Top Ten Ways to Know Your Campaign Sucks

The RPG top ten for this week is... The Top Ten Ways to Know Your Campaign Sucks 10) Everyone meets in a tavern. 9) A dark robed man enters the tavern looking for "adventurers". 8) There's a fight in the tavern. Because every fantasy world has all of its taverns filled to the brim with mercenaries, thieves and assholes just looking to fight anyone who happens to be around, regardless of the consequences. 7) The only thing that the players remember from the last session is the pizza, and it wasn't that great. 6) Your NPC's are way more important than your PC's. Its your world by jebus , and you don't want "players" screwing it up. 5) Your Elf/Dwarf hybrid race the Dwelves are not well received. No one recognizes original ideas anymore. 4) You're using the world of Synnibarr for your campaign. 3) For dramatic effect you demand that players dress and speak as their characters when they enter the games room in your hous
Read more

I have been working on the outline for a new campaign world and I will have the first drafts ready in about two weeks. I would like to thank  Zzarchov , Tyler and  seaofstarsrpg for their comments from my previous post . They helped a lot in gaining some perspective on a somewhat muddled idea . I am looking for people to collaborate with on this project. I have plans to publish it, and already have a few other people on board and would love to have more. I don't want to go into too much detail here, but if you're interested email me at: jack(at)ruleofthedice(dot)com and we can talk. >
Read more
More posts