The Whiner at the Table 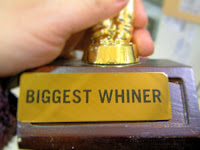 In my years of gaming I've dealt with rules lawyers, power gamers, mix/maxers and almost every RPG stereotype. But in my opinion the worst, most irritating and contentious player is the whiner.

Its unfortunate that some gaming groups are plagued with the whiner, and in some cases due to friendship or politics have to keep that person in the group. I have had to deal with it twice in my gaming history and I've developed some rules to help the situation.

1) Whining will get you a loss of XP - This one works with moderate whiners. No one likes losing XP or not getting the full benefits from a given encounter. This works well, and docking XP for being irritating in most cases quells the urge for whine.

2) The gamer time out - This one works with excessive whiners. You're being a whinny dick, go sit on the couch and shut up while we finish up here. The hope is that the person can see the error of their whinny ways and join in later. I have had success with this technique. I think its because its embarrassing for the person to be castigated in front of others, especially when you're at someones house to play a game for fun.

3) If you don't like it you can F**K OFF - This in my opinion is the only way to deal with the extreme incurable whiner. Absolutely no good comes from having them in your group.