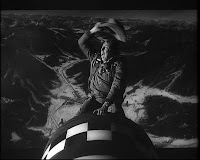 While working on the final draft of my game I came to the realization that making a full fledged, workable role playing system is really f--king hard. I have new found respect for anyone who takes it upon themselves to do something this stupid. Pretty much all of my original ideas about where I wanted to go with the game were chucked out the window about three minutes after I stated them. I would liken the entire process to some type of torture, but having never been tortured the closest reference I have is being stuck in a really long line at WalMart behind the guy with bad B.O and screaming kids - and just when you think the line is going to move, it doesn't.

Now don't get me wrong, there is satisfaction to be found in creating a game. It's just that it is far, far, far more work than fun. But nothing good ever comes about without an ample supply of hard labour, and an even bigger supply of blind rage that you have to do all that hard labour.

So here's a quick breakdown of what I did and didn't use from my original ideas:

1) It is going to be a single mechanic d20 based game. After much consideration this is just the easiest and most familiar route to go down.

I was really lying to myself about this one. I can honestly say that I have had enough of D&D re-makes and retro-clones. I don't quite hate them... yet.

2) It will be easily adaptable and rules lite.

This is the one thing that has remained completely consistent throughout the entire process. My motto has been -"You have to be able to describe the entire system in a paragraph, and character creation should take no more than 15 minutes." I've done pretty good here.

3) It looks like there will be only two classes: Fighter and Magic User.

This is total bullshit, I am such a liar. There will be many classes, and it will be very easy to create additional classes for the game.

4) The Classes will serve as simple templates with which to build a character. There will be plenty of room for player customization and specialization.

This is still kind of true.

5) The combat system is still being worked on. I am leaning towards more abstract combat but that may change.

This is still a go as well.

So about half of what I originally thought is still part of the current game idea, I guess that's not too bad.

Well, I guess I should give a bit of an example of what the system is going to be like. Here is a basic explanation of how the mechanics work in the game, much abridged and sloppy:

- All attributes (strength, dexterity etc..) are associated with skills. Pretty idiot proof, and easy to modify.

- Each attribute is represented by a dice, a d4 to a d12 maximum.

- You roll your "attribute" dice level and your "skill" dice level, add them together, add any other modifiers (magic etc...), and try to beat either a dynamic (dice roll) or static number.

I hope that made sense.

Obviously there's more to the game than just this. I also realize that some game probably already uses these or similar mechanics, that's pretty much unavoidable given the amount of games out there. I was never going for originality anyway, just trying to create a cool game that I want to play, and with some hope other folks might like it too. Now, let the play-testing begin.

If you have any ideas or input, let me know.