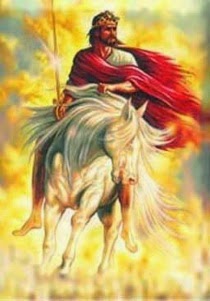 While the title sounds like a ballin' song by a Christian rock band, don't worry - I haven't gone all Born Again on you.  Nor do I intend this to be an insulting or blasphemous post - JC's all right by me, though I would never, ever, not in a million years, let him take the wheel. He doesn't have a fucking driver's licence! How many Hyundai Elantras do you think he was tooling around in two thousand years ago in Palestine, huh?

I have long been fascinated by the connection between Christ's miracles and Clerical magic in Dungeons & Dragons. Virtually every single one of his displays of divine power are described EXACTLY as spells in the old Player's Handbook.  I actually pointed this out to a Church of England minister once, who kind of harrumphed about it. To be fair, he was an avid gamer and I'm sure he must have noticed it himself.  (Funny story: He was way more pissed when I, while trying to explain D&D to a new player, said that the Dungeon Master was God.)

The Cleric class in D&D sucks. It's not a subject open for debate. But if you're going to run a cleric you have to play it LIKE A BOSS, and no one makes cleric-ing their bitch quite like Jesus.

Look at some of the spells Christ has in his prayer book:  Cure Disease (level 3), verified in Mark 1: 40-45, Matthew 8: 1-4, Luke 5: 12-16 and 17: 11-19 where he's healing lepers like they're little red viruses in a jar and he's Dr. Mario. Cure Blindness (also level 3) is cast on not less than four different occasions, mentioned at least once in each canonical Gospel.  For neutralize poison (level 4) though you'll have to go to the Gnostic Gospel of Thomas, chapter 16, where a young Jesus cured the poison of a viper from his brother James.  That means that he was at least a 7th cleric when he was just a kid.  I don't know of any fighter, thief or rogue that wouldn't want him in their party. Like all clerics, Jesus doesn't use edged weapons.  He doesn't have to - he has his fists.

I didn't remember this from Sunday School (probably because I only went to Sunday School like, twice), but there's actually seven different examples* of Christ casting the level 4 spell exorcise (called abjure in 2nd Edition). And he usually did it very quickly, which means he was NAILING those percentile rolls for success. Plus he probably got an OBSCENE level bonus.

One spell/miracle that we can use to pinpoint Christ's exact clerical level is the Feeding of the Multitude (The only miracle besides Christ's own resurrection that appears in all 4 canonical Gospels - Matthew 14:13-21, Mark 6:31-44, Luke 4:31-44 and John 6:5-15).  The story goes that Jesus fed 5000 people with just a few fish and loaves of bread.  This sounds like a pretty obvious comparison to the 4th level spell create food and water, which creates enough food for 3 people for one day, multiplied by the caster's level (so a 10th-level cleric could feed 30 people for one day, or 10 people for three, etc).  Now assuming he was just feeding people for one meal instead of a full day, I think would could safely triple that number (9 people per level). Ummm... on second thought, you can keep my share.

If Jesus was a 20th level caster, he could then provide a meal for 180 people per application of create food and water.  Not too shabby.  However, a 20th level caster can cast only eight 4th level spells a day, which adds up to enough food for only 1440 people - well short of the multitude described in the four Gospels.  In fact, in order to feed 5000 people, Jesus would have to be in the neighbourhood of a 60th level caster (assuming he maxes out at 9 spells a day) - which on the one hand is within the realm of possibility since he's the Son of God and all, but on the other hand is a bit of a stretch because you would have to kill A LOT of ancient dragons to hit the 10 million or so XP required to reach 60th level.  I don't remember Jesus slaying any kobolds, let alone any dragons (maybe in the Gnostic gospels?).  I'm sure if Jesus, Peter, James and Judas had survived the Temple of Elemental Evil like 30 times, it would have been mentioned in one Sunday morning service or another.

(Of course, it's also possible that the Apostles, who by now had been following Jesus for a while and were probably grinding up their own levels in Cleric, could have cast a few applications of create food and water to help him out, but their levels would not have been particularly high so the bulk of the conjuration would still have had to come from Christ himself).

Also, this give me a great idea for another post - statting out all the Apostles.  You know Judas Iscariot would be a back-stabbing rogue. 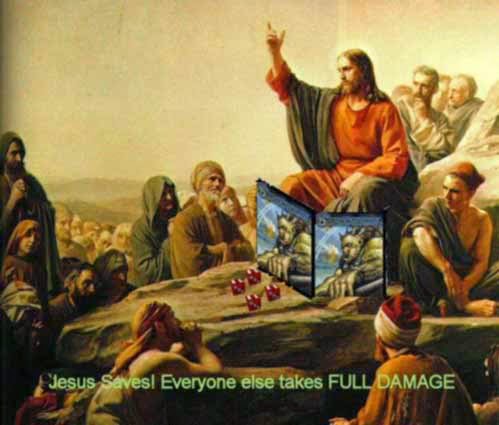 Don't think I would dig JC as a Game Master, though.  I imagine all of his adventures would end with a preachy moral.

So yeah, Happy Belated Easter, everyone! For those lapsed Christians who didn't make it to Church this past Sunday, that was your religion lesson. You're welcome.