Player characters in role-playing games are generally supposed to be the "heroes" of the story, the good guys or at least the "anti-heroes." But as well all know, as often as not, the PCs end up just being homicidal maniacs. We affectionately call our characters in D&D "murder hobos" for a reason.

A long ways back I told you about some of the most horrifying things that my players did at the table in the name of "fun." It's been a while, so I've since found a few new choice treasures to add to that list.

Note: I'm not trying to imply that my friends are all psychopaths that should be locked up (well, except maybe for one guy). All of these stories are presented in good fun, and should not be used as evidence in any trials or psychological tests performed in the future.

I talked about my DCC-style funnel grinder zombie game in depth awhile ago. Haven't had a chance to play it in ages, which is unfortunate because it always generated the best stories. Which is another way of saying the most despicable stories.

Here's one for example: All the characters in the game are generated completely randomly, so we often got weird and often nigh-unplayable combinations. One guy actually ended up with a paraplegic in a wheelchair, which was a big liability in a zombie survival RPG. The player was game for it, though, and he played it to the hilt, even naming the character Dancin' Jack in a sad sort of irony.

Of course, this was the game that also featured the ultimate asshole, Hank the Tank. Hank was also randomly generated, and came up as "evil," so his players went balls-out as well. He was massively antagonistic to all the other characters, and treated them like disposable resources to save his own neck. The pinnacle of his douchebaggery came when he used poor Dancin' Jack as a human projectile, tossing him at a gang of approaching zombies to slow them down while the others escaped.

4. Church and Hank the Tank

I spoke about this one before in detail on my other blog, but it's definitely worth a mention here. Only a handful of characters survived the zombie apocalypse game mentioned above.  Our friend Hank the Tank was of course one of them. In the next adventure, he joined up with a mysterious man named "Church," a hard-ass army vet who seemed to be able to help them survive and get out of the city. Of course Hank was a dick the whole time, making a point to save his own life again and again rather than help anyone else. Amazingly, he, Church and one other kid survived despite numerous close calls thanks to the new guy's skills and experience. Our "heroes" were literally walking down the bridge away from town, the adventure seemingly over, when Church stopped to hold out his hand in a sign of peace toward Hank, telling him he's really not that bad.

Hank immediately stabbed him in the face and killed him.

Church's player was stunned (we all were) but it was narratively perfect and shocking, and we all agreed it was an excellent way to end the session. Now, Church had been bitten by a zombie earlier in the night, so Hank figured that he was perfectly justified in his actions. Of course, at no point in the previous 3-4 game sessions had we established that a zombie bite automatically turns someone into a zombie, he had just ASSUMED that was the way it worked, so it was still a pretty big dick move overall. 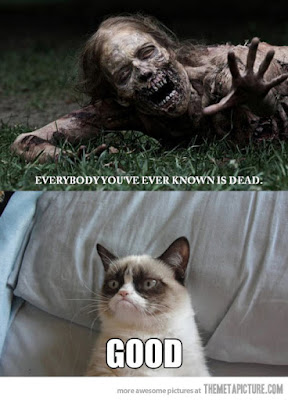 I have one player who always plays the healer role. Clerics in D&D, doctors in any modern game, etc. The thing is, I don't know why he does because he's always a dick about it. He holds his healing powers over everyone's head, doling out curative magic based on his own twisted sense of humour and morality. To be honest I'm not sure why everyone else puts up with it.

His best moment came in a Labyrinth Lord game when one of the characters was maimed in battle and was lying incapacitated in camp. I use a rule that when a character reaches 0 hp, they can choose to be maimed instead of dead, losing a random body part. It fell upon our dwarven cleric to perform the amputation to save his life, but the drunken dwarf insisted that since he wasn't allowed to use edged weapons (being a cleric and all), he had to amputate the leg using his mace.

The way the player described pulpifying his friend's leg in a "surgical" manner had us in stitches, as well as the copious amounts of alcohol he had to imbibe in order to go through with the procedure. If I recall correctly he didn't give any of the booze to the victim, either.

The injured PC ultimately lived, but it was still a jerk-ass move.

Remember the guy who got his leg amputated above? Yeah, he kinda deserved it. He was a sociopath. Xander started off as a run-of-the-mill elf thief, but when the crew gained possession of their own ship, he suddenly turned into a devious pirate, weird speech patterns and all. Gaining a pegleg may have been part of his plan all along.

Did I mention he was a sociopath? He once captured some enemy soldiers and then proceeded to torture them mercilessly despite the fact that they obviously had no useful information. The player's descriptions of the butchering made me seriously question the guy's own mental well-being.

The best part? The rest of the PCs walked in on him, realized he was a psychotic murderer, and STILL made him captain of their crew. THAT'S how much my players hate being in charge.

My best friend in high school hated role-playing games. We both played the same video games, read the same comic books, traded baseball cards and played street hockey together, but he absolutely refused to touch D&D. I think he thought it was a nerd line that just couldn't be crossed.

I don't remember how, but one day I eventually convinced him to play with us. I don't remember his character, he just rolled up some stuff and said "whatever." As soon as the game started, he asked which was the weakest character, and someone pointed out the low-level magic-user. He immediately said "I shoot him with an arrow." We were all horrified. We were in a phase where PvP was an absolute no-no, and tried to convince him to reconsider but he was adamant. For some reason I let it stand, and the attack ended up killing the poor wizard.

He never played with us again. I'm not sure if this example belongs on this list, but I'm sure there was a lesson in there somewhere.

What are some of the most awful things your players have done in game?

You can also catch C.D. Gallant-King on his other blog, Stories I Found in the Closet and on Twitter. Oh, and hey, he writes books, too! Hell Comes to Hogtown is now available from Amazon.com. It's the story of a comic book nerd and a pro-wrestler trying to clear their names in a kidnapping while evading a demonic hobo. Yes, it's supposed to be funny.
CD Gallant-King Fun Lists