What Does 5th Edition Mean to Me? 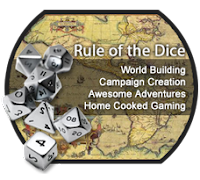 As you may have heard (and if you didn't, welcome to the Internet fellow gamer!), the 5th Edition of the World's Most Famous Roleplaying game is definitely in progress. At least according to Wizards website. And everyone has an opinion about it, with a lot feeling that Wizards didn't give enough support to 5E, a lot feeling that this will be just as bungled unless they do this or that. I have thoughts and opinions on it as well, but why add to the mess of sound when it would just be redundant?

Instead I had to ask myself, what does this mean for me, a gamer who got into roleplaying well after 4E had come out? I mean, I'm a spring chicken compared to most gamers. I didn't cut my teeth with 1st or 2nd Edition rules. Heck, I only had a passing knowledge of 3rd Edition thanks to the D&D PC games. And though I got into roleplaying at what might be called the height of 4E's popularity I never really took to the 4th edition ruleset.

I suppose that's why I'm a little excited over a new edition, even if, under the coat of glossy big words and all the hype a redesign brings, the game turns out to be a massive letdown, at least I'll be here for its debut. I'll be able to be there day 1, with everyone else, deciding whether or not Wizards succeeded at their nigh impossible goal of making a game that plays well enough for fans old and new to accept.

Me? I'm not beholden to any particular system. 1st Edition, 2nd Edition, 3rd Edition, 4th Edition, Redbox, Rules Cyclopedia, none of it means D&D to me. To me, a kid who grew up without Dungeons & Dragons in his early life, watching others play this mysterious and strange game, filled with arcane rules and funny dice, D&D took on a shape that it could never, ever live up to in my mind.

For me, when I got into roleplaying, I'll admit that I was a little disappointed. Over the years of watching others play, I had my own ideas of what that strange game with the elves and dwarves and dragons was all about, and 3rd Edition didn't really capture that image. And so far, nothing has.

But you know what? After my initial disappointment, I was okay with that. I was having fun, whether it was with 4E, 3E, a retroclone, or something else entirely. I learned the rules only facilitated the game, not defined it, and like every single roleplayer who has ever picked up a d20, I began adapting those rules to suit my games.

So yes, while a part of me feels certain that WotC is going to create some kind of bastardized amalgamation that I won't want to play, another part of me is hopeful. Even if it's not the D&D everyone wants, maybe it'll turn out to be fun.

And isn't that what this hobby is supposed to be about?