Last week, appropriately enough on Friday the 13th, we played the second-ever session of SPLATTER-ELF: The RPG. I had a new group of three completely different players from the first session, which works out well to get new perspectives on the game. It was also great for me because I got to reuse the same adventure!

In the first session we had three people who game just for fun and didn't really care about the rules. They had a good laugh though, and really enjoyed hacking the shit out of everything they ran into and accidentally choking out enemies with their own intestines.

The second session had two guys who were more familiar with and comfortable with game mechanics so they went out of their way to try different things, which from a testing perspective was very helpful. The third guy hadn't gamed in years so he was just having fun being there.

It was interesting to see how the two groups reacted to the same situations. In some instances they did the exact same thing (both groups had at least one player try to sneak out of town to bury their treasure, only to get attacked by violent lepers). Both groups had a player who tried to lower his encumbrance by spending money on whores. The second group (wisely) did their best to avoid the lake monster, rather than trying to kill it like the first group did. Subsequently no one in the second party got any boobs bitten off.

The most beautiful moment of the second session came when the party was negotiating their price for uncovering the secret of the disappearing cows. The cattle rancher offered three methods of payment: coin, cattle or one of his daughters, to which the Uff character replied: "Only one?" The sleazy rancher pointed out that he could only marry one of the girls. The Uff shrugged and said "I don't want to marry her. How many do I get if I only want to fuck them?"

(For reference, they eventually settled on 500 pieces of gold and 2 daughters.)

We played a more stripped down version of the rules than I presented here a few weeks ago. I've been going back on forth on the finer details of the game (I have no less than three versions of the rules now!) Last night's version did away with levels, a lot of the skills, and the damage calculation. It uses the same basic mechanic (roll a d12 for all actions, opposed by your opponent's d12). If you beat your opponent, you "hit"; each character can sustain a certain number of hits before dropping. Of course, each hit is described in as much gory and bloody detail as possible.

We used Roll20.net which has it's own set of quirks to meander through, but once we got over the bugs it worked pretty well. Jason Salvatori recently convinced me to stop making elaborate maps and detailed encounters and it's much less painful now. Instead of huge maps and battlemats, now I just use the tabletop as a whiteboard to sketch out battle details as necessary. If it's not a large complicated battle I'll just throw up a picture of the area or monster to help set the scene. It saves me a lot of time and headache, and feels way more organic than fiddling with all the tokens and map components like I used to use.

It may not look like much, but this the aftermath of a pitched and heated battle where both sides fought with the fervent lust of crazed dervishes and no quarter was given. The fields are fertilized with the blood of the fallen, and the blades of the victor drip crimson gore that is their trophy. Did I mention this fight was over five gold coins?

So how did it go? Pretty good I think, considering we started late and then had to stop early because real life pulled people away. The two hours we were actively playing moved along at a good clip despite using new rules that no one was familiar with and having one player who had never used Roll20 before and hadn't played an RPG in over a decade. The system is pretty straight forward and nothing flashy - I really think the fun in this game stems from how willing everyone is to be over the top and ridiculous. 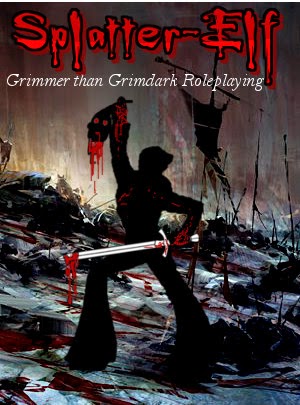 This. This is the level of ridiculous you have to be willing to go to.

I continue to be encouraged that this might actually work. The best part came out of the discussion we had after the session, debriefing and going back and forth about what everyone wanted to see in the game. A few lights went off in my head and I'm going to have to go back to the drawing board, but I am excited. The final game is probably going to look way different than where I started from.

Side note in closing: I've run this adventure twice and I still haven't gotten all the way through it (and it really isn't that long). Neither group has been able to find out the secret behind the "mysterious disappearing cows." I'm also trying to find a better name for it than "The Secret of the Mysterious Disappearing Cows." I've come up with a few possibilities:
@sethdrebitko on Twitter also suggested: The Bovine Boost

@allforjury suggested: This Adventure is No Bull

Any thoughts on those? Anyone have a better idea?