How to awesome up your players characters 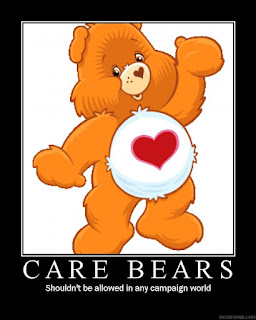 I expect my players to create characters that they think are completely awesome, and it is my job as a GM to facilitate the awesome within the context of my campaign. Repeat this many times, let it be your mantra and your players will love you forever.
Everyone wants a unique and cool character to play. Whats the point in playing someone who is mediocre, if we wanted that we would play Administrators & Secretaries not Dungeons & Dragons. Heroic characters doing heroic things in a heroic world filled with heroic adventure is what we all want and it is your job as the GM to deliver it.

Here are four suggestions for players and GM’s to awesome up a player character.
1. Delete unawesome elements - If the game you play has boring, useless, fluffy or irritating character classes or races, get rid of them before you start playing. This way no one will feel either compelled (the super role-player type) or obliged (the “balance the party type”) to play them. Now this is different from group to group, but as the GM you should know what your group likes and dislikes.
2. Add awesome elements without remorse - Make every race and class compelling. As GM Sit back and ask yourself, would I play a ? and have an awesome time. When the answer is yes to every one of them you are done.
3. Back story, back story, back story - Nothing exists in a vacuum. Your players need to create their characters history and what motivates them and why. I know some players hate this (munchkins, power gamers I’m lookin’ at ya) but without a back story a character is just stats. You don’t need to write a novel a paragraph will do and it will make a world of difference for playing. It is your job as GM to create or inform your players of all the interesting elements of the campaign world so they can have a good back story.
4. Make sure the character has character - This is something I will do an entire post on soon, but simply put a character without character is two dimensional and boring. Give your character some unique and interesting traits. Maybe he has an accent, maybe he walks with a limp or carries the picture of a lost loved one. All of these things give him character and set him apart from other characters. Make it unique, we are all sick of loner mages in dark robes that sit in corners.
I’m sure there are plenty of other good ideas out there. How do you awesome up your players characters?
This post was in some part inspired by a post on Jeff’s Gameblog called “How to awesome up your players”, thanks Jeff.