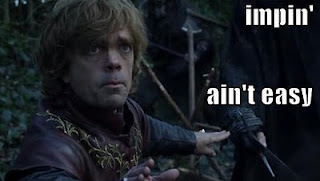 It's been awhile.  So long, in fact, that Blogger seems to have finally caught up with the 21st century while I was away.  Mobile-compatible sites?  Updated, more user-friendly post-editor?  I guess I don't have to bug John to switch to Wordpress after all.

But enough about Blogger.  What have you missed in my gaming world??

Our PBEM Battlestar Galactica came to an abrupt end when I died (see, I was right to be afraid) and the other characters ended up on a cliffhanger Mexican standoff (with each other) as the Cylons were just about to attack.  Nice ending, and I would love to go back to it some time, but the truth of the matter was it was growing a bit stale and we needed a change.  Through no fault of the DM, it was hard to keep people interested when he was competing with summer vacations, kids off school, visiting relatives, etc.  It's understandable.  So, wanting to shake things up a bit, I offered to take over and run a different game.

That was mistake number one.

I offered to run A Game of Thrones (the old Guardians of Order d20 version, that I talked about here).  I figured with all the hype around the recent TV series and new book, people would really dig it, and be able to get excited about playing again.

That was mistake number two.

Then I sent everyone some background and told them to make characters, explaining the changes to the d20 system used in the game.

Strike three and I'm out.

What I'm getting at is that my AGOT game is not really running as smoothly as I would have hoped, and I think it's mostly my fault.  Allow me to explain:

We had already burned out playing BSG.  People were busy and distracted and we probably should have taken a break (and we did, sort of.  It was a couple of weeks between the end of BSG and the official start of AGOT, but it still felt like I forced it).  I thought by changing things up I would re-invigorate the group. I was wrong.  I think people needed downtime to cool off and recharge.  It sounds silly to say you need a "vacation" from playing "games" but it's true.

When I announced I would run A Game of Thrones, I had 6 people immediately jump on board (the most I've ever had for a PBEM game). Then one dropped out.  Then I discovered that another had only watched a couple of episodes of the series and knew little about the setting.  Then I found out that a third (my brother-in-law) has not watched the series OR read the book, and knows even less.  He has no excuse, either, because he's heard the rest of the family talking about it for years.


I've had no response or contact from a fourth player.  Planning to cash in on the AGOT hype just did not work.  We started playing with only three active players, and it just doesn't seem to have the "oomph" I was hoping for.  Maybe it will pick up, maybe not, but I'll keep trying for a little while.

I had forgotten how stupidly complicated the Guardians of Order AGOT game is.  It takes the basic d20 frame, but then adds a dozen extra rules to combat in hopes that it will keep you from engaging in any.  Not only do you have armour class and hit points, but you have damage reduction, defence rolls, shock value (the amount of damage you can take in one hit without passing out, a number which by the way is laughably low), fatigue value, etc.  Sure, it captures all the flavour of combat in Westeros, but because of the way it's set up most characters, no matter what their level, are going to go down after a single solid sword slash, so all those rules seem redundant to me.  Then you add in background feats, and house feats, and reputation and influence, and suddenly you have this massive, bloated, complicated character creation process as bad or worse as anything in 4th Edition.  I'm trying to trim down the rules and make it simpler, but I'm worried I've already scared my players away.  Like I said, I only have three who are now actively playing.

On top of that, before we started playing, I wrote a lot of background material.  Like, alot alot.  You know how many characters GRRM introduces in every book?  I basically did the same thing for my game.  Want to know what the first email looked like?

"You are in the Lord's Great Hall, surrounded by people.  Here is a list of all 50 of them, with a brief description of who they are.  Who do you want to talk to?"

So what do I do now?  We keep playing but it feels a little forced, without any of the excitement of previous games.  Anyone have any suggestions?  Should I just keep playing and hope that it picks up?  Should I scrap everything and try a different game system or setting?  I have a couple of players who really want to play, but some of my other regulars are just too busy to play now, so maybe I should find/invite some new players?

Of course, there is at least one other option... (lemme know what you think of that one, too...)