Ode to My Dice 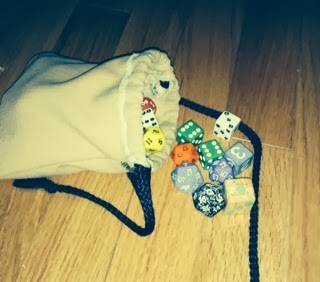 Downstairs on my desk is a little bag full of colourful polyhedral dice.  It sits there quietly, patiently waiting for a need to draw it back into action.  It sits unmolested (except when it gets jostled, a die falls upon the floor and the cat knocks it around) and full of promise, a symbol of another age.  It represents power.  Possibility.  Excitement.

I wonder if this is how Bilbo felt with the One Ring sitting on his mantle for 60 years.

Funny story - My SECOND set of dice was coincidentally the exact same colour scheme.  A couple of the dice have been lost over the years so I'm not 100% certain which ones came from the first set and which from the second, but I still like to say that combined they're still my original set.  With God as my witness, the two 20-siders are cursed with opposite types of luck.  One of them can't roll better than 5, the other can't roll less than 15.  The best part is they look identical, so I don't know which it's going to be when I pick one up. I refuse to mark one of them or keep them separated for risk of spoiling this fascinating hiccup of probability. 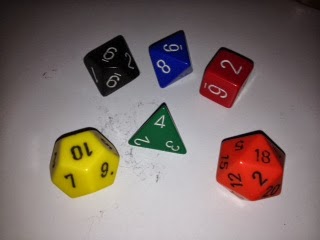 The greatest journeys begin with the smallest step.

The bag itself is worth mentioning.  It's made of some cheap, unremarkable loose-woven brown material with an extra long black sash cord to tie it closed.  It is one of a matched set of identical bags that were made by myself and my friend Jason for the first play we worked on together in theatre school back in 2000.  They were filled with nuts and bolts and used as counterweight for a prop light that was raised and lowered onstage during the show - pretty low-tech stuff, but in theatre you make do with what you have.  We each kept one of the bags after the show, and we went on to do many, many other shows together (in 2001 alone I think we did 400 performances of f***ing Graveyard Shift). Most importantly, he went on to become one of my gaming buddies for many years.  We still play by PBEM and on Google Hangout.  He was also the best man at my wedding.

There's a bunch of red, white and green 6-sided dice in the bag.  I bought those from my local "general store" and gift shop (Arlim's in Stephenville, NL - amazingly they're still there, and they still don't have a website) when I was about 15 to play the Star Wars RPG.  Those dice saw some epic games, and some that were not quite so noble.  I also can't imagine how many times they've been stacked in little towers and castles by bored players during slow parts of the game.

This is not what it looks like anymore, but I can't find any other pictures.  That UK flag is not just for show - the store has been there since before we became part of Canada.

I have a couple of dice that I know I accidentally acquired from other players.  I certainly don't remember buying them, so unless there's a dice fairy out there I'm not aware of, then I am an uninentional dice thief.  People probably lose hands for that in some societies.  To anyone from whom I've stolen a polyhedral die, I sincerely apologize.  Give me your address and I'll mail it back to you.

In later years I took to using Magic the Gathering life counters for my twenty-siders.  They've got a little more heft than your average d20 and always have a cool colour and motif to them.  They have a different pattern to the number layout (a "standard" d20 has 1 opposite the 20, 2 opposite the 19 and so on) which would probably give some hardcore dice enthusiasts a heart attack, but I dunno, I just like the feel of them.  Plus they have little weird symbols in place of the "1" that just makes it feel more mythical and doomed when you roll those dreaded natural 1s.

Then there's my Vampire: The Masquerade dice.  Ten identical mottled grey/black 10-siders (I think they're actually from "Wraith: The Oblivion," but the Vampire ones had cheesy fake blood specks on them), stuffed inside a smaller black velvet bag printed with a quote from Hamlet about chance and Fate.  They were a gift from my then-girlfriend (now wife) back when played the hell out of Vampire, around 1998 to 2000.  We were young passionate theatre people and it suited us perfectly.  We played it on our trip to Halifax to audition for theatre school.  We took the rule books and read them together when we went out for dinner (I remember nachos was often a popular choice).  The bookshelf in our first apartment was made out of cardboard boxes and sagged under the heavy weight of RPG books, most of which were Vampire sourcebooks.  Friends came over and commented "wow you have a lot of geek books."  Those dice always sat somewhere on the shelf, too, proudly beside those geek books. 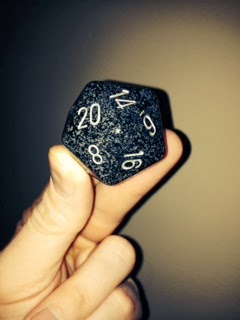 Our wills and fates do so contrary run
That our devices still are overthrown;
Our thoughts are ours, their ends none of our own.
- Hamlet, 3.2.208

So yeah, my dice have a story and a history, and though they don't get used much anymore they're still very special and important to me.  Writing this reminded me just how nostalgic I am for them.

And you know what?  They'll be even more special one of these days when my son picks them up and asks me what they're for.  You have no idea how much I'm looking forward to that day...

What about you?  Does anyone else have fond memories about special dice?  Do you put such importance on them, or are they just little bits of plastic that generate random numbers?

Apparently you can follow me on Twitter, because that's a thing: @CDGallantKing
CD Gallant-King Dice Dungeons and Dragons RPG Star Wars Vampire the Masquerade