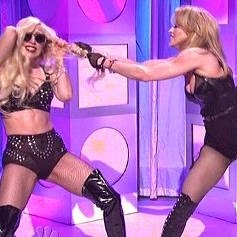 Splatterday Night was an illustrious moment in the history of Splatter-Elf the RPG. For the first time ever, the Godfather of Splat himself, Philip Overby, joined us live via satellite from Yokohama, Japan to sit in on a play-test session of the game. We hoped to learn great things from the man who coined the term "Splatter-Elf" and basically invented the genre, but sadly the biggest thing we learned is that Google Hangouts hates people that live in Japan.

(Your hear that, Google? I hope one of your bots scans that and you fix your stupid software.)

Anyway, after an hour of fiddling with Google+... and Roll20... and Skype, we eventually got a usable work-around and we were off and running! This time around we had a dwarf Sanguine Sorcerer (note: he was a "midget" human, not a dwarf-dwarf - an important distinction that he loved to remind everyone about), a Hunter-Killer (a new build, basically a ranger/brigand) and Mr Overby played a Bloodlust Berserker with a ventriloquist dummy (actually the skeleton of a goblin) he called "Rodney." The Nefarious Cutthroat from session 2 nearly joined us as well, but was called away during our 60-minute attempt to log into fucking Google.

The good news is that all that frigging around really got everyone in the right frame of mind for Splatter-Elf; grumpy, impatient, irritated and homicidally enraged (isn't that everyone's reaction to Google Hangouts?) The group plowed through the first part of the adventure, cutting through the legwork/exploration part in record time, ignoring all side encounters, red herrings and potential combat situations like it was no thing. I'm coming to realize that a) I'm either really bad at building scene-driven, plot-based adventures or b) my players are really good at seeing through my ruses and once they get the adventure hook they hold onto it like a 500-pound catfish.

After roughing up some townsfolk, making a deal with a whore that involved attaching a giant magical leech to the midget's testicles, and stealing the inkeeper's glasses for the Berserker's near-sighted bone puppet, the group had all the clues they needed to find the lost treasure (the treasure of course being the wizard's goods that the last group failed to capture during the previous session). Because they had burned through the bulk of my adventure so quickly, I had to throw the standard Splatter-Elf go-to encounter at them: murderous lepers. It's a good practice encounter for those who are new at the game because it gives a taste of combat without being too dangerous, plus it gives plenty of opportunity to build up some Blood Points to use in the tougher encounters to come.


The group found the treasure, only to be attacked by a giant demonic beaver (the wizard's guardian, which also survived the last session and escaped) and its pet undead cow. The group survived, though barely... it was a close call. The berserker survived being crushed by a flying cow by a hair (and a very lucky roll) and in the end they only won because the dwarf blood mage got off a fortuitous spell that stunned the beaver long enough for them to put it down.

Overall a pretty successful night. The guys seemed to enjoy it (though Philip was actually hoping his dude was going to die spectacularly). The most fun (and horrified guffaws of uncomfortable laughter) came from one of the players' jaw-dropping descriptions of his character's actions. A major rule I've added to Splatter-Elf since the first roll-out is that the players have to describe the effects of their attacks. I simply say you inflict a "minor wound" or a "severe wound," and the player has to come up with what it looks like. Where do you hit the enemy? With what kind of weapon/action? As long as it falls into the proper categories of minor/major/severe/dead, and the description entertains the game master and other players, the player gets Blood Points that he can use to fuel more powers and special attacks down the line.

The dwarf Blood Mage's descriptions were horrifying, disturbing and hilarious. Philip described it best, likening it to Cards Against Humanity: the stuff he was saying was so terrible, inappropriate and disturbing, the only response to it was to laugh (well, either that or log off immediately and unfriend him on Facebook.) For example, one of his spells, "Steal Vigor," steals hit points from an enemy and heals an ally. The spell description describes something about a black mist being drawn magically from the victim, that then forces itself into the ally and is described as horrifying to witness. The player took this several steps beyond that, explaining - in detail - exactly what shape that "black mist" took, exactly how it "penetrated" the other player (repeatedly) and exactly how that made the character feel (as well as throwing in the resulting body functions it triggered for good measure).

Yeah, this ain't a game you play with your little sister.

But that's what I'm trying to do. I don't want it to simply be an extra-weird and creepy version of Dungeons and Dragons. Nor do I really want it possible to play a watered-down version of Splatter-Elf that simply becomes Dungones & Dragons. I want the weirdness and the horror and the sense of humour to somehow be intrinsically tied into the rules so you can't separate the two.

I also learned a few technical things that need to be fixed, like the ratio of attack vs defence bonuses (everyone misses way too much) as well as the Blood Powers still need tweaking. The Blood Mage works great, but non-mages also need something to make them equally fun to play.

Thanks for reading! Tune in next time when the Berserker turns the dwarf mage into his new ventriloquist dummy as payment for "healing" him.