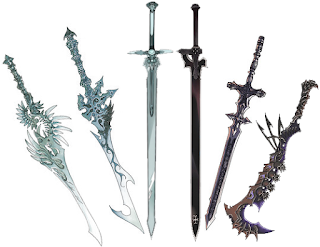 Well, as a literary genre, it's never gone anywhere and is actually alive and well in the a new series of stories by Philip T.D. Overby (they're available on Amazon!). But now, for the first time in quite a while, Splatter Elf the game makes a triumphant return.

The main character in Philip's stories is a half-elf mercenary obsessed with collecting swords, so I decided to stat out a few of her favourite weapons for use in Splatter Elf: The RPG. Now, these weapons are specifically designed for the SE version 0.3 rules, which have not been widely shared, but you get the idea.

Also of note, these are completely unofficial versions of the weapons and how I envisioned them to be used in the game. Philip would have his own take on them, which obviously supersedes anything I say here. 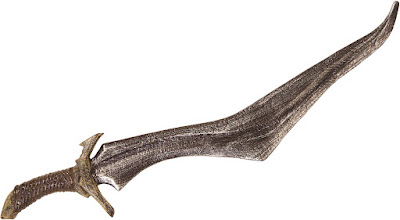 "The warped, cracked blade looked like hammered shit, but it hit hard and couldn't be broken."
- from The Unicorn Eater

Named after the Starseer Bathbrady's wife, Lauralee is made of Garlaxian bone, one of the hardest materials in existence and cannot be broken. Some believe Garlaxians are aliens from outer space, powerful beings that could break swords and men with their bare hands. It is immune to acids that destroyed other magic swords.

When grasped, the wielder feels alternating attacks of chills and warmth, and will be psychically assaulted by visions of otherworldly skeletal beasts, their wails terrifying and disorienting. Someone wielding Lauralee for the first time will find it difficult to endure such cacophony, but over time they get used to it, though it always rises in intensity when in the presence of monstrous threats.

Lauralee grants its wielder a +3 bonus to hit, and inflicts 2 extra wounds on a successful attack. It may be wielded single handed (3 wounds total) or with both hands (4 wounds). It is virtually indestructible, and gains a +12 bonus to any roll to resist any damage or attempts to break the weapon.

It also grants the wielder the Weapon Breaker blood power. On a successful hit, the wielder may spend 1 blood point to forgo the 2 extra wound levels of damage and instead destroy the target's armour, weapon or shield. Non-magical equipment is destroyed automatically; magical gear gets a defense roll (you may add the equipment's "+" bonus to the roll). If the defense roll beats the attacker's roll, the item is not destroyed. The victim still takes the base damage.

The first time the wielder picks up Lauralee, they suffer a +3 attack versus their Aegis defense. If they fail, they are temporarily driven insane for 1-12 rounds as they try to deal with the screaming skeleton monsters trying to get into their brain. The wielder suffers this same attack the first time they meet a dangerous enemy while holding this blade, and again the first time they suffer a mortal wound. After that, as long as the blade remains in their possession, they become immune to these attacks. If the the wielder loses the blade for two weeks or more, they will be subject to these checks again when they recover it. 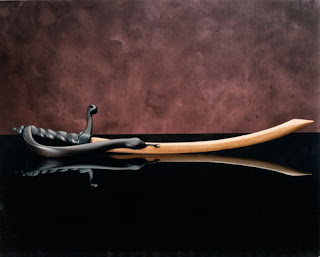 "Serpent's Kiss had been on her father's list for years, always slipping through his filthy fingers. He told her, 'Chasing invisible swords is the same as loving someone that you know is going to die one day.'"
- from River of Blades

Once carried by a bandit lord across Groteskia as he poisoned merchants and attacked wayward travelers, Serpent's Kiss is a short, slightly curved blade with a worn leather hilt. Rather unremarkable, but with a glint of green upon its edge.

A relatively minor sword, Serpent's Kiss provides a +1 bonus to attack rolls and grants the wielder the Slow Poison of Excruciating Demise blood power: On a successful attack, the wielder may spend 1 blood point to poison the defender. Roll 1d6 - the victim loses 1 health level each turn for that number of turns.

The venom of Serpent's Kiss is so virulent that it is even dangerous to its wielder. Any time the wielder does something stupid while holding the blade (missing an attack while attempting a risky maneuver, performing some feat of dexterity - like jumping or climbing - while the blade is drawn, trying to wrestle it from another character, etc) the  player must make an attack roll against himself. If successful, the character is poisoned for 1d6 turns.

C.D. Gallant-King wrote a book. It actually does have a sword in it, though one that is not as cool or well-named as Lauralee. It's available now from Amazon.com. You can also catch him on his other blog, Stories I Found in the Closet, on Facebook and on Twitter.
CD Gallant-King DIY RPG Magic Swords Splatter-Elf