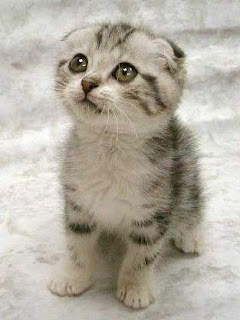 I really, really wanted to put a picture of Amy Winehouse here, but at the last minute decided it would be too inappropriate. So here's a kitten instead.
Usually my horror games are basically Dungeons & Dragons, replacing the Dungeons with Creepy Old Houses and the Dragons with Zombies. I try to set up some spooky atmosphere but it quickly devolves into players beating on undead minions with crowbars, or blasting them with shotguns. I honestly don't even know how to write a horror adventure, let alone run one. What do I do when my players want to play one?

Then it hit me. A few months ago, a buddy of mine was starting to GM for the first time, and was trying to decide what game to run (he settled on Battlestar Galactica). I gave him some suggestions and pointers, advice which I should probably think to take myself from time to time. As I recall, there were two major suggestions, that I think any new Game Master should take under advisement:

1 - Play what you know. This either means a system you've played before, or at least a world/setting you're familiar with and enjoy. If you've never GMed before, and you've never played F.A.T.A.L., and you're not into violent misogynistic fantasy, then you're probably going to have a pretty crappy game. 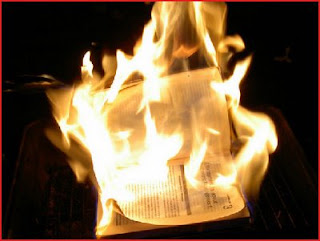 In all honesty, setting fire to the rule book is really the best one can hope for from a game of F.A.T.A.L.
2 - Find a pre-written adventure and steal it.

It's that rule #2 that I forget about all the time. For a new GM, it's a godsend. How are you supposed to write an adventure for a game you've never played? The first couple of pre-written adventures I ever ran were bad, so I've always gravitated away from running someone else's work. That's stupid and short-sighted of me. When running a game that I've never played before, why would I try to reinvent the wheel when thousands of people before me have already figured out that square wheels don't work?

So, for my d6 Horror adventure, which I modeled after Call of Cthulhu, I went to the source to find a prefab adventure module, from Chaosium's website. There are dozens of free modules there. Not all are great, but they provide excellent framework and are easily adaptable to my own needs. A few Google searches provided many more links.

There are lots of places out there to get good, free, download-able adventures. Using someone else's adventure is not a dirty thing to do, nor do I think it's wrong to tweak it to serve your own ends. If you're in a rush, or have a new system, it's a great way to get started quickly.

So how did it go? I've have to let you know. We never actually got to play last weekend - family commitments and all that - but now I am ready to go at the drop of a hat for next time. It's nice being prepared. 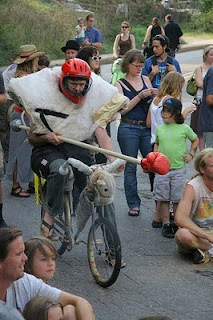 Though not as prepared as this guy. He's definitely ready for something. I doubt it's a relationship with a woman.
Anyone else have great places to find free adventures? Lemme know. Robbery is the sincerest form of flattery.