Why Incomplete Games Are Sometimes the Best

April 23, 2014
We've all played poorly designed games, whether they are badly run RPG campaigns or poorly thought out board games.  You know the ones I'm talking about - Games with random winners, Games with so many rules it takes 3 hours to set up and learn the first time, games with terrible game-play, or that obscure puzzle the GM throws at you where you need to remember a tiny insignificant detail from 2 campaigns ago that just happened to be in the same world, but is otherwise unrelated.


But every once in a while a game comes along that could be so much more but isn't, and it's a good thing. The example I'm going to use is: Star Wars: X-Wing Miniatures game.  As a quick overview of the game, it is designed to be a 2 player or 2 team PVP tabletop game.  Each player chooses a side of the table, and a faction (Rebel Alliance or Empire).  You then choose your ships, pilots, and modifications. Each has a point value, and you build your fleet to the agreed upon total.  After that, it's a fight to the death.

Please don't misunderstand: In this way it is a complete game, and quite fun to play.  There are a growing number of tournaments for this game, and deep strategies are emerging.  The problem is, outside of tournys you can only have so many dogfights before the game gets stale.  To help with this, also included in the original game and a couple of particular add-on expansions are missions with specific goals. These missions add a new dimension of play to the game, especially for casual play.  An example of a mission from the Millennium Falcon expansion can be watched on TableTop.

So now we come to the crux of the statement: There are only 8 official missions, and they are spread across the core set and 5 expansions.  In a more static type of game, this would be a game-killer. But in an open fleet-building game, it allows the players and community to use their imagination and to draw on the lore of the background universe to get creative.   The original release of the game was on August 17th 2012, and since then there have been tons of player created missions.  A quick peek through BoardGameGeek.com shows many posts in the forums of people sharing their own ideas, and replies after play-testing to try to refine and properly balance the scenarios. 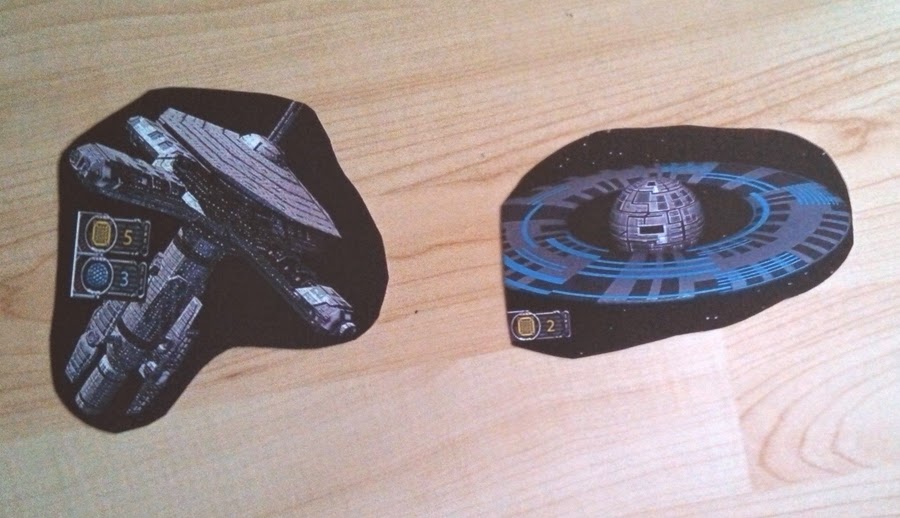 To that end, I have been busy with Google image searches and Photoshop, creating the custom tokens I'll need for my next game day, a mission inspired by the Battle of Hoth, but in space.

The Imperials must defend the base and its shield generator from the attacking rebel fleet.  I printed the pieces on 110lb paper from Staples, put the mission parameters in writing so everyone is on the same page, and boxed it up in my kit.  Hopefully all goes well when we play it next week.

So, thoughts on this game? Disagree with my assessment? Opinions on my first post?  Leave them all below in the comments section!
Board Games Jason Salvatori miniatures Star Wars Tabletop X-Wing