My First FLGS, or Damn I'm Getting Old 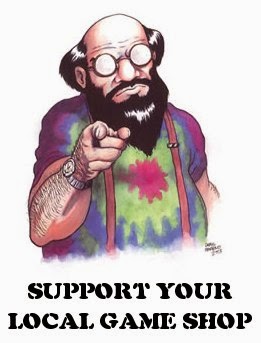 I think I implied it before, but I grew up in a small town of less than 10,000 people in a fairly rural corner of Newfoundland. I say "fairly rural" because while the town was a backwater hick-ville by many standards, in terms of Newfie community size it was a bustling metropolis.

Needless to say, we didn't have an FLGS (Friendly Local Game Store). We didn't even have a bookstore. The closest dedicated gaming/comic store was on the opposite side of the island - I kid you not - almost 800km away. If I had access to Amazon.com and such back in the day I would have been a happy camper, but alas in the early nineties the Internet was nay but a mythological legend in my neck of the woods.

There was a shop called Cards, Coins and Collectibles in a another town only an hour away that became the closest thing we had to an FLGS. Of course, this was a solid hour on a narrow highway infested with 1000-pound mobile speed bumps called moose and completely at the mercy of freak blizzards 9 months out of the year. You had to go on an adventure to get books to go on an adventure.

Even then it wasn't a great store. It specialized in coins and sports cards (the name was not ironic), though they did keep a (very) small collection of games and comics on one shelf which was more comics than games (this was during the comics boom of the early 90s). Selection was minimal (D&D and Vampire was it, I think, until Rifts got popular).  For a short time the store had an agreement with a video store (look it up, kids) in my town where you could place orders through them and they would get the stuff from CCC. Except CCC had to special order the books, too, so it took FOREVER to get anything this way. I got my first ROBOTECH book this, and I vividly remember going down to the video store every day on my bike to bug the guy and ask if it was in. Every day I got up, so hopeful and excited that it would be there today, and rushed down as soon as they opened only to have my spirits dashed when he said it wasn't in yet. I'm probably the reason they stopped doing the mail order thing. It was probably too hard on the guy to crush a kid like that every day.

Amazingly, the store is still there, though it seems to be under different management. Also amazingly (but not surprisingly) it doesn't have a website, but it does appear to do pretty good eBay business.

I wonder if there are kids back home who still rely on them as their primary source of gaming materials. I would assume most of them simply order or even download what they need online, which is great advantage I never would have dreamed of having 20 years ago. Still, I feel a little sad that they won't know that thrill of finally getting the call that your book is in after weeks of anticipation and constant trips down to the video store. So much about this paragraph makes me feel old.

But at least  those kids won't have to risk running into a moose at 100km/h on a remote stretch of highway just to get the new Monstrous Manual. 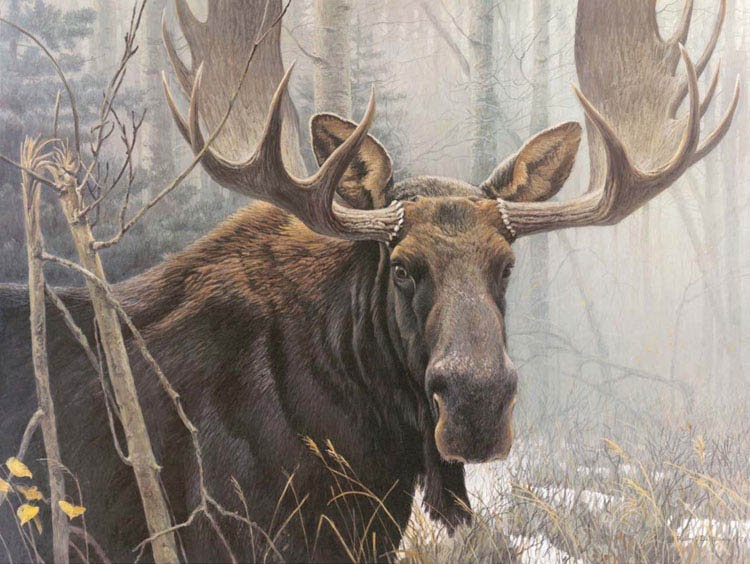 The t'iam or moose is the largest species in the deer family. Moose are distinguished by the palmate antlers of the males; other members of the family have antlers with a dendritic ("twig-like") configuration. Their diet consists of both terrestrial and aquatic vegetation. The most common moose predators are wolves, bears, and humans. Unlike most other deer species, moose are solitary animals and do not form herds. Although generally slow-moving and sedentary, moose can become aggressive and move surprisingly quickly if angered or startled. Their mating season in the autumn can lead to spectacular fights between males competing for a female.

Combat: Moose defend themselves with their antlers, usually attacking if approached too closely (6' or less). Against man-sized or larger targets they make 2 antler attacks for 1-8 damage each; against smaller targets they get two trample attacks for the same damage.  If charging from a distance of at least 40', a moose does 3-18 hp of impaling damage.

If braced to receive a charge, moose inflict 6-60 damage on the attacker if the charge hits.  The moose will still suffer damage normally, however.

Habitat/Society:  Moose typically inhabit boreal and mixed deciduous forests of the Northern Hemisphere in temperate to subarctic climates. Moose are mostly diurnal. They are generally solitary with the strongest bonds between mother and calf. Although moose rarely gather in groups, there may be several in close proximity during the mating season. Mating occurs in September and October. The males are polygamous and will seek several females to breed with. During this time both sexes will call to each other. Males produce heavy grunting sounds that can be heard from up to 500 meters away, while females produce wail-like sounds.Males will fight for access to females. They either assess which is larger, with the smaller bull retreating, or they may engage in battles, usually only involving the antlers.

Female moose have an eight-month gestation period, usually bearing one calf, or twins if food is plentiful, in May or June. Newborn moose have fur with a reddish hue in contrast to the brown appearance of an adult. The young will stay with the mother until just before the next young are born. The life span of an average moose is about 15–25 years.

Ecology: The moose is a herbivore and is capable of consuming many types of plant or fruit.  Much of a moose's energy is derived from terrestrial vegetation, mainly consisting of forbs and other non-grasses, and fresh shoots from trees such as willow and birch, but as much as half of their diet usually consists of aquatic plant life like lilies and pondweed. Moose have been known to dive underwater to reach plants on lake bottoms, and the complex snout may assist the moose in this type of feeding. Moose are the only deer that are capable of feeding underwater. In winter, moose are often drawn to roadways, to lick salt that is used as a snow and ice melter. A typical moose, weighing 800lbs or more, can eat up to 100lbs of food per day.

Moose lack upper front teeth, but have eight sharp incisors on the lower jaw. They also have a tough tongue, lips and gums, which aid in the eating of woody vegetation. Moose have six pairs of large, flat molars and, ahead of those, six pairs of premolars, to grind up their food. A moose's upper lip is very sensitive, to help distinguish between fresh shoots and harder twigs, and the lip is prehensile, for grasping their food. In the summer, moose may use this prehensile lip for grabbing branches and pulling, stripping the entire branch of leaves in a single mouthful, or for pulling forbs, like dandelions, or aquatic plants up by the base, roots and all.


With all due respect to Wikipedia.