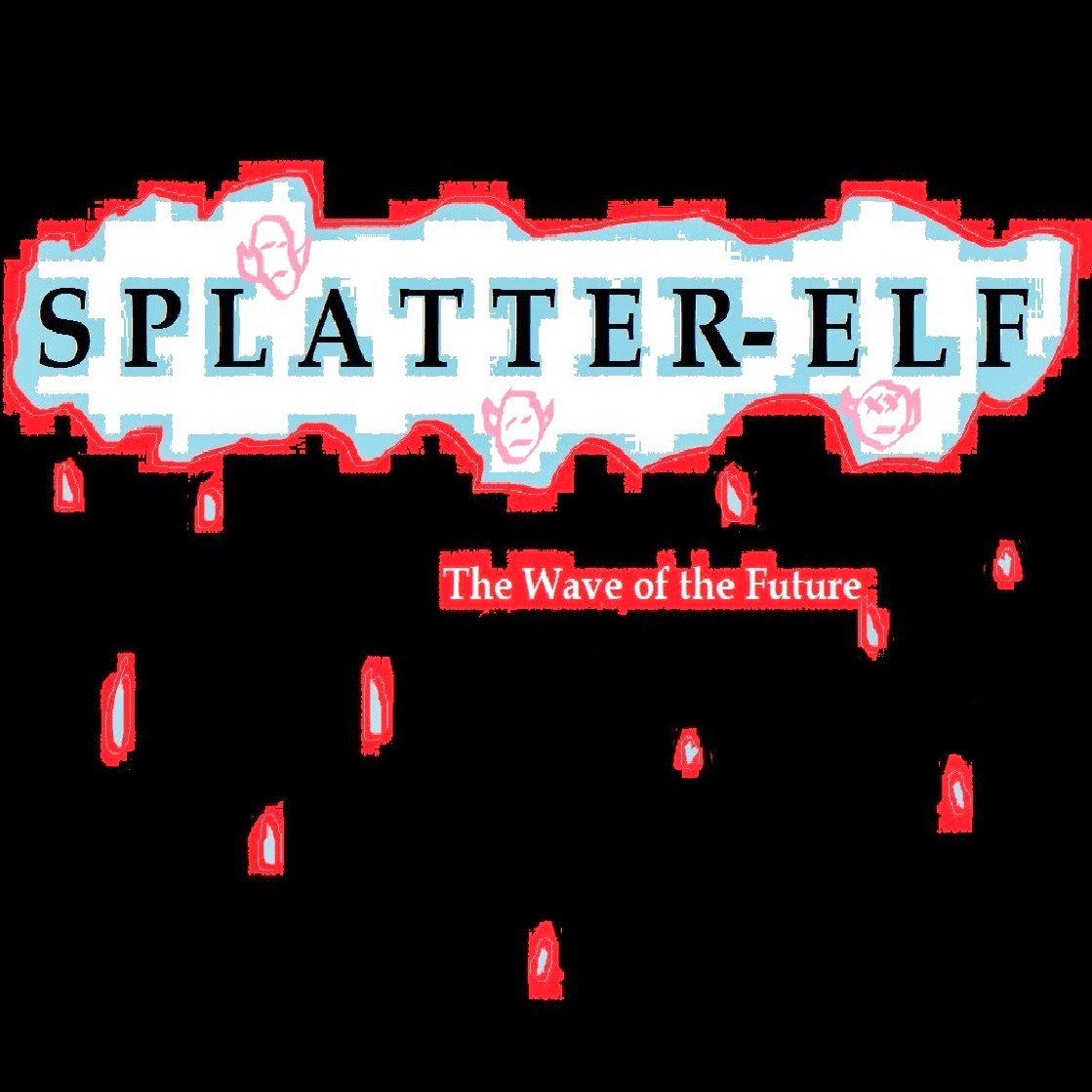 I've been rather surprised by the feedback for Splatter-Elf: The RPG so far. I've had people approach me asking for more info about it (someone even wanted the rules so they could play it!) and I've seen it discussed on forums completely without my prompting. It's pretty nice to have a circle of supporters (as small as it is) and it encourages me to keep tinkering with these rules to create a full-blown game. Of course, no discussion of Splatter-Elf is complete without mentioning Philip Overby, the Godfather of Splatter-Elf himself who coined the term and gave me the idea in the first place. But that's all Philip gets: one quick mention. The rest of today's post is about some ideas I've been kicking around for the game.

For those of you who have been paying attention, the basic mechanic for Splatter-elf uses a d12. If you want to attack something you roll d12 and add applicable modifiers. The target rolls d12 and adds his modifiers. If the defender rolls higher, the attack misses. If the attacker rolls higher then it hits and does damage equal to the difference between the rolls, plus a bonus based on the weapon used.

A couple of points to remember here:

Not to open a can of worms, but I think we're all aware that most RPGs can be divided into two categories: Old School and New School (or Modern). (There's also a "Post-Modern" style of weird dice-less and group storytelling games, but I'm not touching that with a ten-foot pole).

Old school games tend to have less codified, more open-ended rules. Classes are fairly basic and (usually) straight forward and it's up to the players to create the setting, flair and flavour through their imagination. Modern games are heavily influenced by video games and tend to have more involved, detailed rules. The flair and flavour is built right into the rules. In an old-school game, your fighter can hit with a sword, and it's up to you and the GM to describe what that hit looks like. In a modern game, your fighter has many choices of how to attack, each with specific advantage and disadvantages based on the situation. Players of either edition will claim the other version is boring and restrictive.

My problem is that I can't decide whether Splatter-Elf wants to be Old-School or Modern. It's really straddling the line right now, and it could go either way. Lamentations of the Flame Princess, a major influence on Splatter-Elf, is about as old-school as you can get. Simple classes, straight-forward combat, basic spells. The weirdness and horror comes from how you play and describe your story, not necessarily from the rules themselves.

On the other hand, Splatter-Elf could easily borrow and adapt more complicated, crunchy modern rules. Rules for excessive blood loss, special attacks that allow you hit multiple enemies, cleaving through minions, weird movement abilities, ongoing effects for poison, slowing, stunning, etc. Not to mention Advanced Feat or Skill trees to develop more customized, crazy-powered characters, or even more complicated and specialized character classes. They could all work and fit within the wild world of Splatter-Elf. But do I want them to?

I'm currently leaning toward a simpler, more old-school base game. That's a big enough commitment, and I think would be a fine achievement if I could pull it off. Once that's finished, I would LOVE to do an add-on module to put in those extra-crunchy bits - more powers, more skills, feat trees, and so on, plus tougher and more dangerous monsters to go along with that.

Am I way off the mark here? Anyone have any other suggestions for direction I should take?

The following are a few new spells that were created based on suggestions by reader (and big-time Splatter-Elf fan) Marcus Claudius Marcellus. Somehow I doubt that's his real name. Anyway, though these incantations are intended for Splatter-Elf, they can be easily adapted to other fantasy RPGs, especially if your game veers toward the twisted and grotesque.

Crucify
Minimum Caster Level: 3
Availability: Rare
BP Cost: 4
Duration: 1 round / caster level
Range: 50 feet (10 squares)
The caster makes a gesture toward a target and telekinetically lifts the victim off his feet and holds him, suspended just above the ground with limbs spreadeagled. If there is a wall, tree, post or other suitable object within 10 feet of the target when the spell is cast, the caster may choose to forcefully fling the victim against the object and pin them in place for the duration of the spell. Crucify only works on humanoid creatures of Large-size or smaller.

The caster makes an attack (plus caster level) vs the target’s Will. If it succeeds, the victim is paralyzed and cannot move, even to defend himself for the spell’s duration. They cannot speak unless they make a successful Mettle skill check. If the blood mage chooses to pin the victim against a solid object, they also take damage equal to the different between the attack and defence rolls.

Excruciating Hemorrhage
Minimum Caster Level: 6
Availability: Common
BP Cost: 7
Duration: See below
Range: 50 feet (10 squares)
The caster selects a point within 50’ of his location and makes an attack roll (plus caster level) versus the Will of all living targets within 10’ of that point. On a hit, the victims immediately begin painfully and messily bleeding through all bodily orifices – eyes, ears, nose, mouth, anus – for a number of turns equal to the difference between the attack and defence rolls. Damage is 3 hit points per turn.

Victims also suffer a -2 to all rolls during this time due to the excruciating pain. Magical healing or a successful Sawbones skill check will stop the bleeding for the round it is applied, but the bleeding will resume and continue causing damage and penalties on the next and all subsequent rounds until the duration expires.

Funeral Feast
Minimum Caster Level: 2
Availability: Common
BP Cost: 3
Duration: See below
Range: 25 feet (5 squares)
The victim suddenly becomes ravenously hungry, and the only thing that can satiate them is the flesh of the dead. They immediately stop what they’re doing and will drop to their knees and try to consume the closest dead body.

The caster makes an attack roll (plus caster level) vs the victim’s Will. On a hit, the target drops everything he’s doing and moves to and begins to munch on the closest dead body for a number of rounds equal to the difference between the attack and defence rolls. The victim will not attack or move away from its meal, though it will defend itself (make defence rolls) if attacked.

There must be a visible corpse within 25’ feet of the target when funeral feast is cast or the spell fails. The spells works on both humanoids and animals. The corpse may be either fresh or long dead, but there must be flesh left upon it (skeletons are not tasty), and the corpse may not be animated (the spell does not work on zombies and other undead).

Eating a long dead, rot- and disease-infested corpse may infect the diner with disease at the GM’s discretion.

Self-Eviscerate
Minimum Caster Level: 3
Availability: Common
BP Cost: 4
Duration: Instant
Range: 25 feet (5 squares)
The caster looks at the victim and speaks words of dark foreboding. The target suddenly feels deeply forlorn, as if all hope is lost. He knows that his life is pointless and worthless and has no other choice but to end it all. He immediately tries to run himself through on his own sword, realizing only too late that it was all a trick. The magic and the despair lasts only a moment, but the wound remains…

Make an attack roll (plus caster level) vs the victim’s Will. On a hit, the target automatically strikes himself, doing weapon damage (plus applicable Strength bonus). Worse, he opens a horrible bleeding wound in his abdomen that will cause him to lose 3 hit points every turn until cured by magic or a successful Sawbones skill check.

This spell only works on intelligent humanoid creatures that have a weapon at hand. Creatures of animal intelligence or lower and supernatural inhuman beings do not understand despair and are not affected by self-eviscerate.
CD Gallant-King DIY RPG Game Design Magic Spells Old School RPG Splatter-Elf