The 5 Most Despicable Things Ever Done by Player Characters 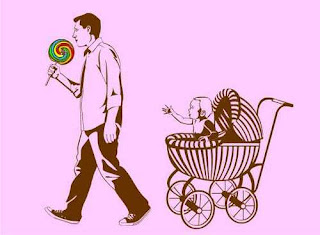 Player characters in RPGs are generally supposed to be heroes. Many games and game masters insist their players only choose "good" alignments to enforce this assumption. However, despite everyone's best intentions, whether through accident, greed or sheer boredom, players and their characters often end up doing horrible, horrible things. I mean, in D&D alone, the "heroes" make their living by robbing graves, murdering intelligent creatures and stealing their life's savings. And that's when they're on their best behaviour.

I'm not here to preach about the morality in gaming (that's a post for another day). Today I just want to share some despicable, shouldn't-be-funny-but-they-kinda-are stories about nasty shit I've seen players pull off in the name of a "game." Without further ado...

The 5 Most Despicable Things Ever Done by Player Characters

5. In a post-apocalyptic zombie game (Dead Reign), the players were being hounded by an evil army colonel who was doing experiments on the zombies. The players defeated him, wounding him in the process, and one of them took him hostage. She stripped him naked, forced him to help her to right a jeep that had been turned over during the battle (so she could use it to escape) and then while his back was still turned SHE SHOT HIM IN THE BACK OF THE HEAD. I was speechless. The player ranted that it was the correct thing to do to make sure the bad guy didn't do the same thing to her when her back was turned (and she had a point, I probably would have pulled that), but that's what BAD GUYS ARE SUPPOSED TO DO. 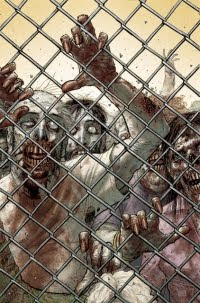 Why is it when faced with the threat of a zombie hoard, the survivors always shoot each other?
4. In an old D&D game, the party was captured by an enemy army. Some how it came about that the bad guys offered the captured PCs a chance to join their side. The goody-goody paladin refused of course, but the ranger took them up on their offer. The bad guys said that in order to prove his loyalty, the ranger had to kill the paladin. The paladin, hoping to pull of some sort of trick, knelt down and offered his neck to his companion.

PALADIN: "Do what you must."

RANGER: "I cut his fucking head off."

I ruled that since the paladin was unarmed, exposed and basically giving him a free shot, the ranger scored an automatic double-damage critical hit and killed him on the spot. Maybe that was a bit of a jerky thing for me to do, but hey, he asked for it. I think the paladin's player actually went in the bathroom and cried after that. So many of my campaigns end this way. I don't know why.
3. Same two players from the above example, but in a Star Wars campaign. The ranger was a smuggler this time, and the paladin was a bounty hunter. They group had only recently banded together and was fleeing some stormtroopers, and the smuggler got back to the ship first. He locked the bounty hunter out.

BOUNTY HUNTER: "Let me in!"

SMUGGLER: "I barely know you! How do I know I can trust you?"

BOUNTY HUNTER: "How can I prove you can trust me?"

SMUGGLER: "Put your head on my gun." (Referring to the turbolaser turret on the underside of his spaceship)

Faced with a charging squadron of stormtroopers, the bounty hunter had no choice but to comply.

SMUGGLER: "I pull the fucking trigger."

The bounty hunter complained about not getting a defence roll, but c'mon. He really should have learned his lesson with the Paladin.

2. Rifts. One of my most hated games, but I had to include this one because I was the despicable player in this example and I wanted to be fair. I got to be a player in Rifts because I hated it too much to GM, so if my group wanted to play, someone else had to run it. Didn't mean I had to like it or play nicely. As we traveled through the world I picked up hopeless children and orphans and dragged them along behind us, feeding them and keeping them alive. Eventually, when I had about fifty and we found a big enough pit, I threw all of them into it with knives and clubs and told them to fight their way out. The lone survivor came out traumatized and psychologically scarred. I sold him for a fortune to a slaver as an arena gladiator because he was a proven bad-ass mother fucker.

1. D&D again, this time with a male player who was running a female elf thief. He ran the character for a long time, and she was pretty kick-ass. She was a master cat burglar, head of the thieves' guild, feared by everyone. On one adventure she was hit with some sort of acid/fire trap that horribly disfigured her. The player was horrified. "I can't play her if she's ugly!" he wailed. I joked that maybe if she bathed in the blood of virgins, she could cast a spell to restore the character's looks.

So he did. He murdered seven innocent young women so that his character wouldn't be ugly. Should I have let him? You be the judge. 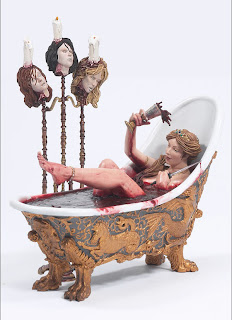 This is why male players shouldn't play female characters.
Another fun fact? The guy running the female elf thief was the same guy who spent the whole Call of Cthulhu adventure going on a date.

There you have it. Five stories about the terrible things players do in games. Maybe they were right about D&D in the 80s, when they said it turned kids into murderous Satan worshipers.

Does anyone else have an awesome/horrifying stories about the terrible, terrible things they've done or seen done in an RPG? Don't worry, this is a safe place. No one will judge you here.