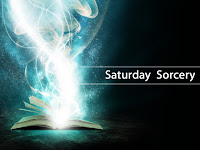 I will preface this Saturday Sorcery by saying that I am of the old school mindset when it comes to magic weapons. I feel a magic weapon should be reasonably unique, reasonably powerful, and possibly dangerous to the wielder. They should be strange, wondrous, and have some kind of backstory.

I dislike the sort of throwaway magic items that proliferate in D&D these days. It turns a powerful arcane force into a trinket to be sold when not in use. There is little to no personal attachment to a specific weapon or set of armor, no lofty ideal of contributing to the legend crafted by a enscorcelled blade, no sign that these supposedly powerful artifacts are anything other than flashy glitz you might find in a local department store. 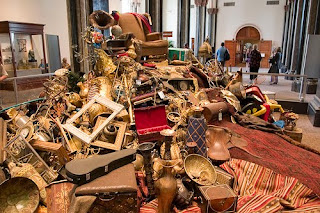 In here, somewhere, are seven +1 swords, eight Wands of Levitation, and a dozen Boots of Fleetness.

So when I create magic items, I try to imbue them with a sense of purpose and history, perhaps even a seed for a plot or two. What follows are three different magic swords for use with any edition of D&D or, really, any fantasy game in general. I have used these in both 1e and 3e without needing any major conversion other than saving throws. I tried to write them in a similar vein as the older editions, including such information as XP Value and GP Value, though I don't recall ever using the former in a single one of my games.

I also make no promises of originality. I haven't read every tome on magic items there is, and some of these designs might be very derivative, especially with all the beautiful custom items out there on the Internet.

Sword of Knowledge
XP Value: 1,000 GP Value: 1,250 Rarity: Uncommon (20% chance in any given dungeon/location)
Description: The Sword of Knowledge is a short sword of fairly unremarkable appearance and behavior, acting exactly as an ordinary short sword with one significant departure. Several were made, though the whereabouts of few are known.

Originally crafted by the sorcerer Manetibane three hundred years ago, its original purpose was to help provide him not only with protection but also a boosted repertoire of intelligence. When equipped, either in hand or in its scabbard, the sword bestows upon the wielder the ability to understand any single fact or information, no matter how complicated or out of their normal field of expertise. It works once per day and may only provide insight into things that it would be possible for the wielder to know, either through research or magical study (e.g. 'What is that large, red, scaly lizard'?). It is impossible to use it to learn things of a nebulous nature (e.g. 'Can we trust Baron Rafis'?).

Arich of Tsradil's Blade
XP Value: 3,500 GP Value: 20,000 Rarity: One-of-a-kind
Description: This broadsword appears normal to casual inspection, and even to a spell such as Detect Magic it will appear plain and un-enchanted. This is because it is not magically imbued.

Instead, it is occupied by the soul of a once-great fighter who wandered the realms in years past. He devoted his existence to the preservation of the empire he followed until the day he and his mistresses were slain by a vicious tribe of beasts from the foothills. His rage knew no limits and it is said that finally the gods cast him from his eternal reward, to remain trapped in an object of the violence he wished to use against those who had killed him.

When used by a fighter-type, this weapon provides a +4 to-hit bonus and a damage bonus of +1 in addition to whatever bonuses the wielder may already have.

However, due to the nature of this living blade, whenever it is replaced in its scabbard or otherwise removed from the wielder's hand, a Saving Throw against Spells must be made. If failed, there is a 25% chance that the wielder will lose his memory from a time stretching back 1d6 years. The memory loss will be permanent and may only be restored via a Wish spell or divine intervention.

The Bonded Blades
XP Value: 2,000 GP Value: 10,950 Rarity: Very Uncommon (10% chance in any given dungeon/location)
Description: These rapiers, clearly marked with runes of thorns and with an aura strongly visible with a spell such as Detect Magic, are from the long-dead empire of Sarish. Each blade is marked with a broken pattern of runes and symbols, matched by an identical rapier. When used singly, each rapier will act like a perfectly ordinary sword.

However, when two individuals are each equipped with matching rapiers, they will be bonded, in the ancient Sarish tradition. Each will be able to feel the mood of the other and communicate non-verbally across a distance of a quarter-mile. When in combat together, the swords will bestow increased combat awareness, warranting a bonus of +2 to-hit. In addition, once per day each bonded individual may cast a modified Cure Light Wounds (1d6, no bonus) on each other.

If one of the bonded individuals should perish, the other must make a Saving Throw against Death or suffer 1d3 points of Constitution damage.

The only way to break a Sarishan bond is through a Remove Curse or Wish spell, and doing so requires that the other bonded individual be freed of their bond within the next 24-hours or suffer the same consequences as if the other had died.
Joe Nelson Saturday Sorcery