Why I'm Afraid of Game Masters 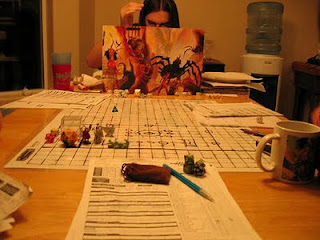 In my 19-odd years playing RPGs, about 90-95% of that time has been as a DM/GM. For me, getting to run a character is a treat because the world on the opposite side of the screen is so strange and mysterious. In fact, I find the relationship between the two roles so strange that I don't know how more games don't break down into fistfights.

As a GM, I often joke about killing player characters and how I'm going to screw them over and make their lives miserable. But it's just that - a joke. I don't remember the last time I actually killed a player character, let alone achieved the feather in my cap of a TPK (Probably because I've been playing a lot of 4E. It's much harder to kill characters in 4E), so I never imagined they would take my threats seriously. But you know what? Actually running a character is scary shit.

A buddy of mine recently started a Battlestar Galactica game. He's only GMed a few times, so he's pretty excited and so far he's doing a good job. But I have to admit, I'm constantly terrified for my character's life. I don't know if it's because I'm just not used to playing, so I haven't quite balanced my risk/gain ratios. Maybe it's because he's just doing well at making us feel threatened, and playing up that there's danger around every corner. Maybe I'm just a big pussy. I mean, c'mon, I've only been playing this character for a couple of weeks. It's not like I'm that attached to him. Yet I'm honestly worried he's going to get blown away any second, and probably in some lame way, like screwing up a landing in the hangar bay or choking to death on a chicken bone.

I said choke ON a chicken... nevermind, it was a terrible joke anyway.

Do all players live like this? In constant fear that their character is going to die? I really don't want to start taking anti-anxiety meds over a friggin' game...

I think my fears stem from an early adventure going way back to high school. I had only been playing for a few years, and mostly Game Mastering. My friends and I got together with a real old-school gamer who offered to run a game of 1st Edition D&D for us. When I say old-school, I mean really old-school: he actually played with Gygax at conventions in the seventies, and actually play-tested the original Palladium Fantasy RPG with Kevin Siembieda. Now HE was a killer GM (the old guy, not Siembieda; Siembieda is just a bad game designer), but I was lucky to pick up on his murderous tendencies right away, and I did everything I could to stay alive. Other players were dropping around me left and right, killed by save-or-die poisons, ripped to shreds by owlbears, eaten by a dragon. One guy went through 3 or 4 characters in one night. I played a fighter, but I spent most of the adventure hiding in the back and letting everyone else set off the fucktarded, over-the-top traps. Even worse, the DM knew how to play it up to make us even more afraid: he kept track of our hit points, and wouldn't tell us how many we had left. He just said, "you're hurt," or "you're really hurt," and we had to guess whether or not we could survive another punch to the face from a mummy.

(I think that's the best example of the difference between new- and old-school gaming I've ever found. In 4E, I've seen guys spend hours calculating probabilities and the best combination of weapons, powers and feats to achieve just the right balance of numbers. In 1E, the numbers didn't matter. You just tried to stay the fuck out the way and hope the DM didn't kill you arbitrarily. I'm not saying one is better than the other, they're just incredibly different.) 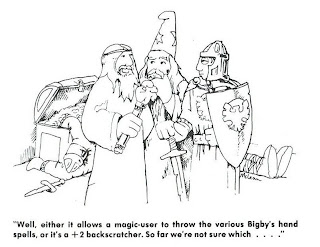 The other difference is that "new school" gamers won't get this joke.

So you have to appreciate that this scarring experience has stuck with me, and I kinda assume that every Game Master since is equally heartless. I know that's not true - like I said, I am in all fairness probably too easy on my players, and I'm sure there are other GMs who are the same. I want to tell a good story and for the players to have fun. I try to make the adventure just challenging enough so that the players have to work a bit for their victory - I'm not aiming to punish them by killing them for failure.

Though that's probably the aim of most GMs, I still feel completely different on the other side of the screen. You put work into most characters, whether it's hours of writing a back story or months of playing or even just a few minutes of generating some random stats. You grow some attachment to it, you want to see it grow and evolve. It's just like a GM designing a campaign - they want to see a payoff, and have players enjoy their creation instead of derailing it in the first session by murdering the king and burning down his castle.

We really should be able to work together. Ultimately we all want the same thing (except for those odd kooks who really do get off by killing player characters), so maybe with a bit of communication and practice I can stop having nightmares about my character being face-raped by cylons (the metal kind, not the fleshy ones). 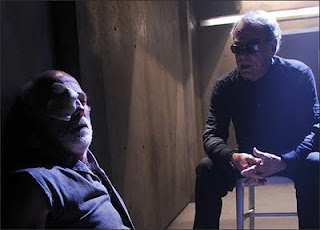 This scene just took on a whole new connotation:
"Now, are you going to cooperate, or do I have to invite my big metal friend back in here?"

Hopefully the rest of you have long ago come to terms with your characters' mortality, but if you have thoughts from either a player's or Gm's point of view, feel free to leave them below.