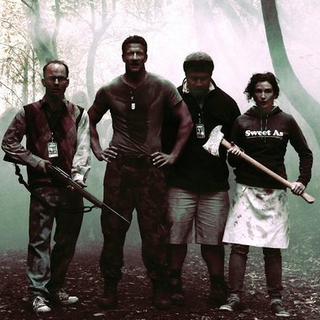 Ah, October. Month of horror and spookiness. We have Halloween, autumn in full swing choking the life out of the world, the season premiere of The Walking Dead, Canadian Thanksgiving. It's a good time for wearing white sheets out in public.

But what's the Month of Spooks without some scary gaming to go along with it? I love horror-themed RPGs, and despite there being plenty of great ones out there, I keep trying to create my own. I was convinced that the d6 system was perfect for it for awhile, and have toyed with the idea of building a full on "D6 Horror" game, but recently my fancy has turned to the glorious world of Fate. I started to brainstorm for a Zombie Survival version of Fate, which would work perfectly fine except that the characters in Fate are purposefully built more competent and capable than average everyday joes. Obviously you can tweak Fate to make it work (you can make Fate work for anything) but what if there's a better way? A game where you can slaughter scores of characters as the zombie apocalypse unfolds around you and only the bravest, toughest and luckiest survive. Look at most zombie movies (or our current zombie benchmark, the afore-mentioned Walking Dead) - there is always a high body count in the beginning, and only a handful survive the early encounters. In The Walking Dead, those characters that survived the first couple of seasons have continued to survive, to the point where the death of a major character is now a big deal. They've become harder to kill. What kind of game follows that kind of progression?

I'm sure I'm not the first person who realized this. The premise of Dungeon Crawl Classic's brilliant "funnel" system is that each player takes a bunch of 0-level normal humans and throws them into a dungeon situation. Those that survive (and there usually aren't many) "graduate" to level 1 and gain a character class and the powers that go along with it. I think this kind of setup is perfect for a zombie/horror survival setting. The world is falling apart around you, the dead are rising, and only the strongest are going to survive.

How would it work? Not that much differently than the current DCC funnel, just tweaked slightly to update it for the modern age.  Each player would get 3-4 characters with completely random attributes (standard 3d6, rolled straight) as well as hit points (1d4). Each character gets one or two random pieces of equipment and a random occupation. The occupation is important because it may imply special skills - a doctor or park ranger would have obvious benefits, while a waiter might be just shit out of luck. I've compiled a list of random occupations, whether you want to codify special skills for each one, or just use the GM's ruling on a case by case basis is up to you.

Some characters might also have a special knack for certain tasks (hitting with a certain weapon or performing certain skills, etc) but these are random and not every character even has them.

And that's it. Once each player has their characters, they are plopped into the adventure. Maybe they're holed up in a cabin and have to survive the onslaught of walking dead. Maybe they're in a shopping mall. Maybe they're trapped in a city with dwindling resources and have to fight their way out. Whatever sort of zombie movie cliche tickles your fancy, toss your players into it and let them fight it out. And let everyone enjoy the mindless slaughter of the innocents as your once-large band of survivors is whittled down to a small band of TRUE survivors. 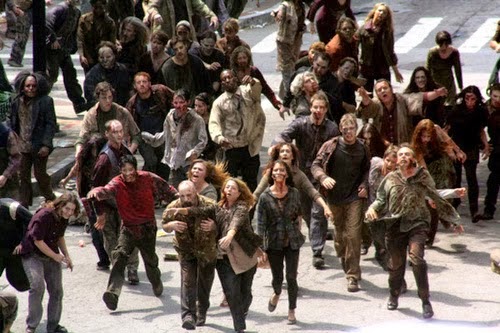 Who will make it out? Maybe someone who got some lucky rolls and has a great AC bonus? Maybe you'll roll up someone with a really cool/useful occupation and his skills will be valuable enough that the whole party will try to protect him? Or maybe it will be a completely fluke, and you'll end up getting out with a dude with a 4 Strength and 1 hit point.

I came up up with some rough classes for the survivors to take. They're variations on the basic D&D classes but with a post-apocalyptic theme. There's the fighter-type class, a ranger, an expert (could be a thief or a anything else you wish, based on the mix of skills you pick) and a leader (kinda like a bard/cleric but without all the bullshit poetry and godliness). Feel free to tweak them or make up your own. Maybe you want a world with magic, so a wizard would be an appropriate option for your group.

Here's the link to the complete work-in-progress file. It obviously needs some work but hopefully you can see where I'm going with it. Any comments or suggestions are welcome!