How to Run a Long-Term Zombie Apocalypse Game 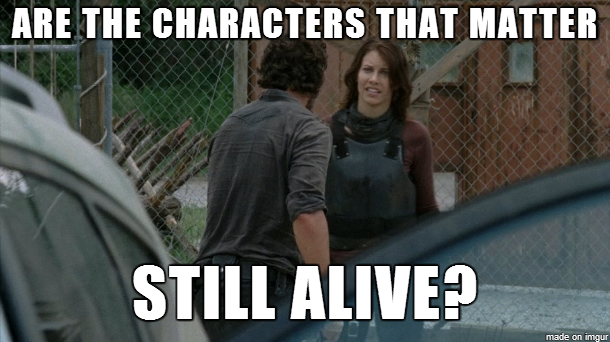 In the past few weeks I've written a bunch about zombie apocalypse games (I blame it on The Walking Dead). I've also been running my regular group through bi-weekly "zombie grinder" sessions, which is basically DCC Funnel adventures but set in a modern zombie apocalypse. It's a hilarious good time but not a basis for a long-term campaign, so I've been trying to come up with some ways to stretch it out and get some more mileage out of a pretty simple premise.

I realized that zombie apocalypse scenarios, as depicted in movies, books and games, can be broken down into three distinct stages (there may be more, but three works well for my purposes). Each stage comes with its own story possibilities and game mechanics, which will hopefully revitalize the players help the game go longer.

Tell me what you think: 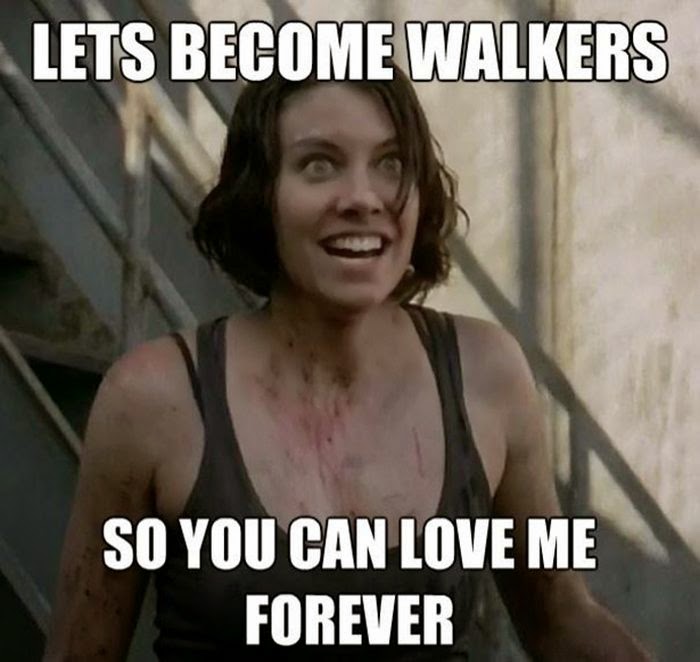 Civilization is crumbling. Humankind has been struck by a terrible plague that is killing people by the millions and causing them to rise from the dead as mindless cannibals. Those that survived the initial infection are now fighting those monsters, as well as other survivors, in a desperate attempt to find food, weapons and shelter. Few will make it far.

This is the phase of the game that follows the "Funnel-Grinder" system. Each player gets 4 characters, and PC mortality is high. Characters die quickly, and only the strongest and/or luckiest survive. The randomness and chaos is the fun and joy at this stage, as a single failed save or attack roll could spell the end of any PC at a moment's notice.

The key is that (hopefully) those few who survive this stage will be extra-tough and ready, with developed personalities and back-stories leading into...

Civilization is gone. A handful of people and small communities still exist, but they are few and far between, and hopelessly outnumbered by the listless dead. Those that survive at the toughest of the tough - the brave, the cunning, the quick and the merciless. Finding food and shelter continues to be a daily struggle, but those who live in this world are used to it and know how to handle themselves, whatever the heartless land throws at them. 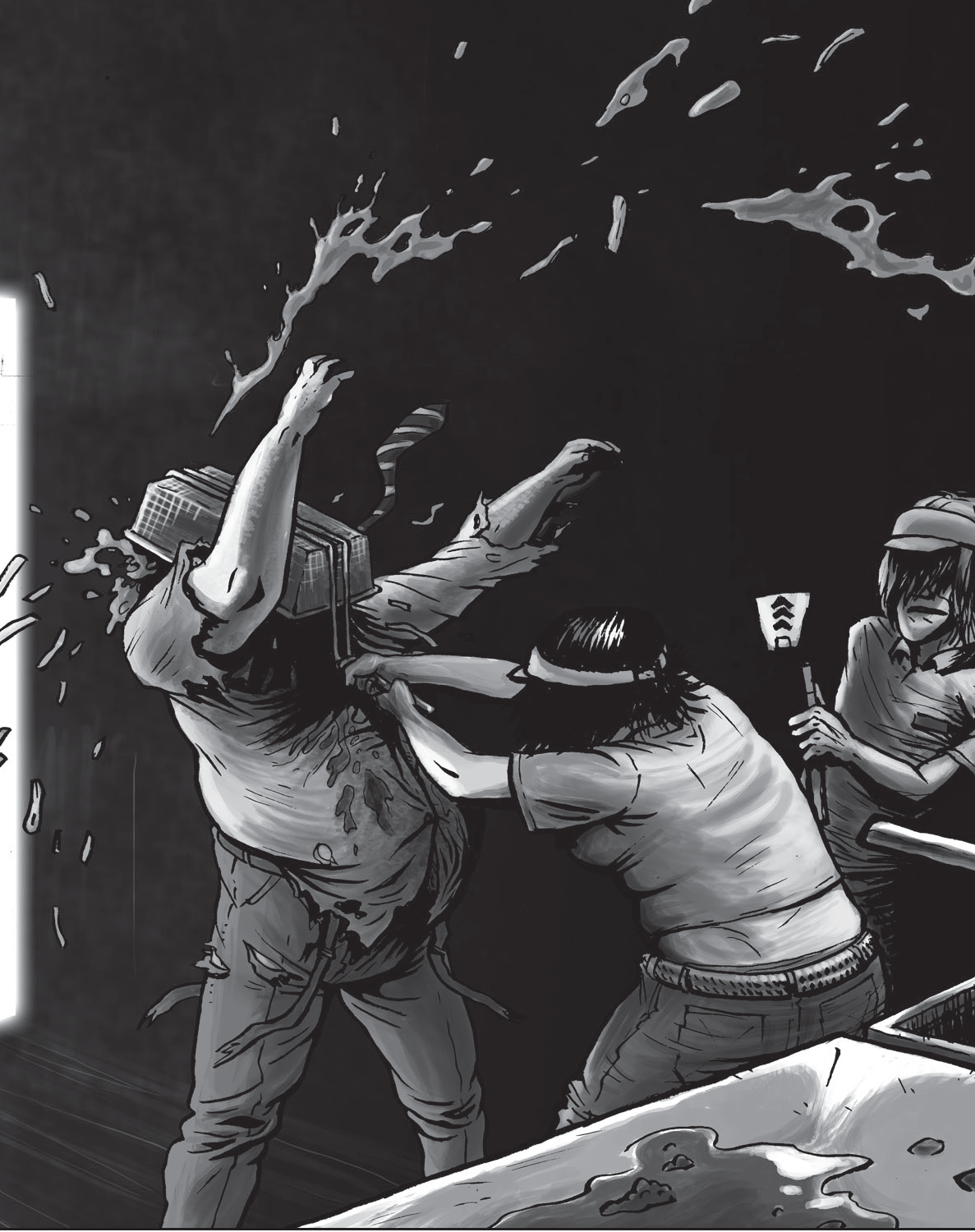 My favourite zombie-related art of all time, and I don't even know if the dude with the deep fryer on his head is actually a zombie or not. And I don't care. From Kreg Mosier's "The Dead."

This is the stage where the player characters become heroes (or villains). They reach level 1 and continue to advance, developing new skills and abilities to make them a threat to the living dead. They can compete against cutthroat bandits and looters that roam the countryside - or maybe they become those very villains.

Relationships are important at this stage. Other people keep you sane and help you to remember your humanity. Losing people (or refusing to seek them out) turns you into a unfeeling shadow of a human being. These mechanics will borrow shamelessly from Kreg Mosier's excellent game "The Dead." Death will still be a real and constant threat, but it shouldn't be as severe as stage one. They characters are able to withstand a few bumps and bruises now, and are more capable of handling tougher opponents. Because of this, hopefully those deaths that do occur will have more meaning.

Of course, growing stronger will draw attention to the player characters, eventually bringing us to...

I admit, this part of the game was entirely inspired by Sarah Northway's great game "Rebuild." 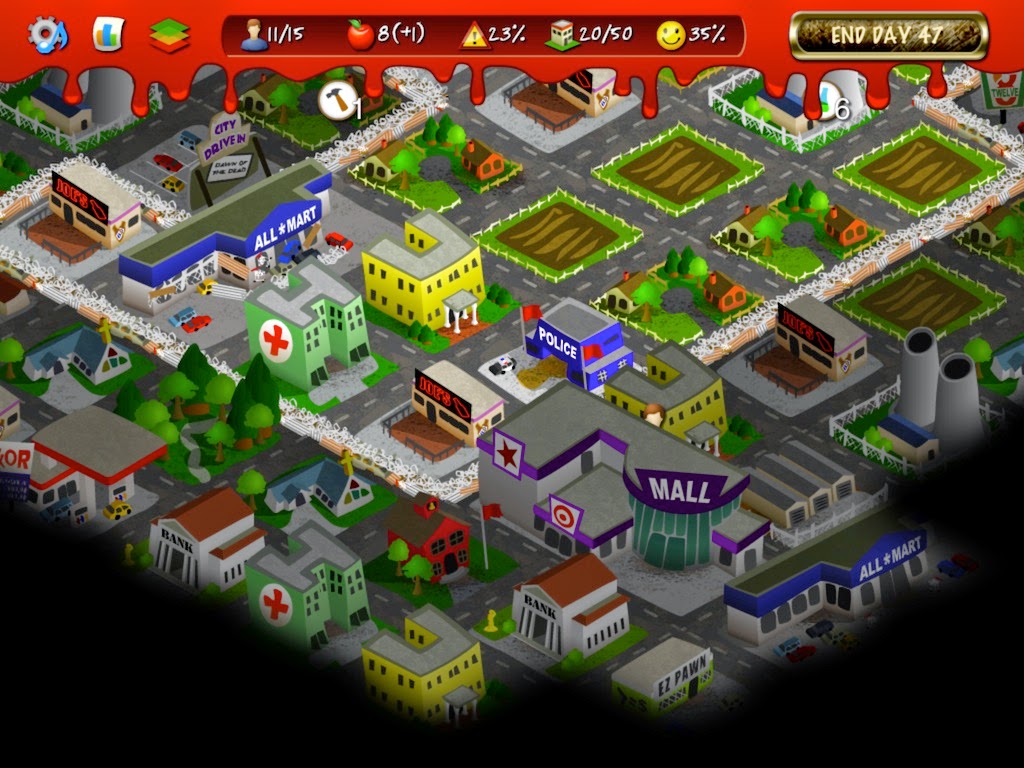 It's like SimCity, but with zombies. You have no idea how many hours I've wasted on this game.

Humanity has reached a point where it can start clawing its way back from the brink. Survivor camps turn into small towns, and eventually stronger fortifications with farmland, homes, schools, churches. The dead (and bandits) are still out there, but a few strong, capable leaders can build new safe havens, and protect the last vestiges of humanity against the encroaching darkness.

At this point, the player characters now have people relying on them to keep them safe. They have to decide how to protect their town, who to trust, how to balance their resources between fortifying, patrolling, scavenging, farming.  When it's time to go scout areas for supplies or build defensive bunkers or clear out bandit camps, the players can take over new bands of 0-level survivors, or resolve the scene with a few quick rolls. Either way, it is their choices that will now determine the lives of dozens, maybe hundreds of other people. It's a different sort of resource management and almost a whole new game.

The three levels are not completely linear. Maybe some folks like the idea of running a town and jump right to the Rebuild phase. Some people may detest that idea and don't bother with it at all. You can step backward, too. If someone loses all their Leveled characters in the Survivor phase, it's recommended they grab 4 new 0-levels and grind out a new "Survivor." Perhaps during the Rebuild phase, the players decide to take out their "good" characters on a particularly-tough mission, which would basically be stepping back to Stage 2.

Or maybe, during the Rebuild stage, shit really hits the fan and the players are FORCED back into Stage 2 (or lower)...

Anyway, these are my ideas for stretching out a zombie apocalypse game. It will still never have the long-term, endless potential of something like Dungeons & Dragons, but it could work for much longer than a one-off lark on a Friday night.

I plan on running one last "grinder" game this weekend, and I hope a handful of playable characters will survive that can go on to phase 2 and become even more memorable. Will we still be playing this game and these characters 5 years from now? I seriously fucking doubt it, but at least now we have the option to do so...

So what do you think? Does this game have legs?