Saturday Sorcery - The Cave of Spirits 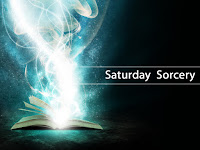 This weeks Saturday Sorcery idea comes form India, the land of a billion gods and kick-ass action flicks. I love India, it is hands down the best place on earth for all things strange and wonderful. I first saw this on the National Geographic Channel and it got stuck in my head. I apologize in advance to any Indian readers who actually know what I'm talking about, and am poorly relating (and embellishing) to others to use in a game.

The Cave of Spirits
The cave of spirits is a place to imprison malevolent spirits that have been exorcised by a sorcerer or priest. The front is often a temple or magical hermitage, but it's what's hidden in the back of this unassuming place that is of real interest. Down a long hallway is a sealed door that few ever enter or see. This is the door to the cave of spirits.

This door is guarded night and day, sealed physically with a very strong lock, and magically with powerful runes and wards. This is not a place that is meant to be disturbed by the foolish.

The keepers of the cave are the great and renowned exorcists of the -- insert cool name here -- circle. They are powerful Initiates of the necromantic mysteries, who devote their lives to this place and the practice of their art.

Only the most vile and terrible cases of possession ever wind up at the cave, and it is often the victims last hope.

The ceremony begins. The possessed victims family and friends are gathered around them in the temple, and the victim is restrained. Now the spirit is forced to manifest itself in the victims body. This is a very dangerous portion of the exorcism. The possessed often have superhuman strength and in some cases magical ability, if not properly restrained grave injury or death may occur. Once the spirit has revealed itself the first part of the exorcism begins.

The exorcists use droning music and ancient chants to confuse and beguile the spirit. If this works properly the victim will become docile and limp, having the appearance of sleep, but with their eyes opened and unblinking.

Now the victim is taken to the cave of spirits.

No one other than the exorcists and the victim may enter. As the spirit  passes through the door it awakens and immediately recognizes its peril. It is now that the true exorcism begins. The ritual may take minutes, hours, or in the worst case days, but the spirit must be drawn from the victims body. This is by far the most critical time, and any mistakes can be fatal. The exorcists risk their lives and their sanity while in the cave of spirits.

When the spirit is finally purged from its unwilling host it is magically bound to the cave wall with a rune etched copper nail - there to be trapped for all eternity.

Of course evil spirits don't like being trapped for eternity, and sometimes these caves are abandoned and forgotten. I hope some foolish adventurers don't pull some weird nails out of a cave wall...

Here is the actual footage of the cave of spirits from National Geographic: