Let loose the Dogs of WAR 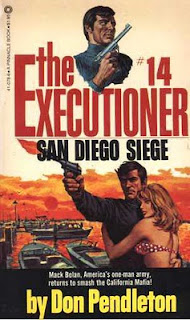 When I was fourteen or so, I discovered my dad's old collection of paperback men's action novels and spent an entire summer reading them, from the adventures of American super spy Nick Carter, to the sardonic violence of the Destroyer, I devoured them all with a fresh zeal, with my favorite being the violent adventures of the Executioner, who would later serve as the basis for Marvel's Punisher. Soon I'd continued on to classic pulp adventure series like Doc Savage and the Shadow, but the men's adventure novels of the 70s and 80s have always held a special place in my heart and on my bookshelf.

So to find a game supposedly patterned after those novels filled me with excited trepidation. Dogs of WAR, by Simon Washbourne, is based around the Bolanverse series (the long running series consisting of the Executioner, Mack Bolan, Pheonix Force, Able Team, and Stony Man, three series of which are still being published as of today: www.mackbolan.com ) though any actual knowledge of those books is largely unnecessary. If you like 80s action movies you'll get along just fine. 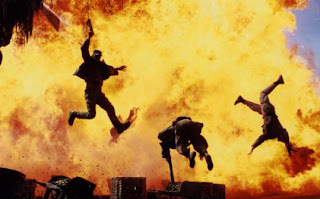 A caption would only tarnish the majesty of this snapshot

The system is an adaption of Simon Washbourne's own Barbarians of Lemuria ruleset. Essentially you roll 2d6, adding bonuses and subtracting difficulty, to try and score over 9. If you do, it's a success, if not, it's a failure. It's quick, simple, and I will admit that I've always liked the idea of rolling over a set number for success every time.

Creating characters sees you assigning some numbers to base attributes, combat attributes, and then finally selecting an occupation. Occupations describe what Boons (essentially Feats) you can choose from and what specializations (skillsets) you can select.

It makes it easy to create characters and doesn't limit as much as some might assume; the occupations actually serve their purpose well enough and help to keep you in the mindset of action characters. Besides, it's easy enough to create new occupations if needed.

As for combat rules, everything's decidedly less tactical than the current incarnation of D&D, but it's not as loose as Badass. You won't need a grid, certainly, and you won't find realistic approximations of a hundred real-world firearms. It is, after all, about being action heroes. But it does have rules for weak mobs of enemies, bonuses and penalties based on specializations, and some other basic combat information you're likely to need. Including a very interesting critical hit mechanic that involves spending Exploit Points (your catch-all luck/hero points) to turn any potential roll into a critical and any roll of double 6 into a mega critical.

It also does away with equipment lists, assuming that you will have anything appropriate on your person. If you have explosives training, you can probably rustle up a little C4 out of your pockets, if you're a sniper, you've likely got a rifle somewhere nearby, and so on. If you need something you don't have, you'll need to ask a PC with the Leadership specialization to call HQ for you and scrounge something up, or risk finding a shady contact to search the blackmarket for you. It works to eliminate the tedious doling out of equipment at the start of every mission.

The weakest aspect of the rules is, in my mind, the leveling rules. You buy upgrades with experience earned each mission, advancing your attributes and specializations. Frankly leveling doesn't really fit into the theme of being a hardened soldier, vigilante, or Sylvester Stallone, it feels a bit tacked on and would eventually result in nigh-superhuman levels of power. For my games I might only allowed players to level up specialties and force them to keep their attributes at the starting amounts, but we'll see once I actually get a chance to run the game. The PDF itself is nicely laid out, with clear, easy to read text in a two-column format. There are a few serious editorial gaffes, including references to Boons that are not in the document, some Boons that aren't used in any of the occupations though they exist in the master list, and at least one reference to an incorrect page number. These flaws are irritating, but hardly kill the overall product.

The art is clean, though the stock art is jarringly out of place when compared to Chris Schieffer's interior work, which is almost lightly comicbook in style and tone, with one or two great pieces and a number of average ones. In any event, the art isn't extensive, and it's used fairly well. At least it won't drain your ink if you decide to print a page or two.

You also get some detailed 70s/80s setting information, a premade crew of hardcases, two sample adventures, some ideas on alternate settings, and an extended description of a number of terrorist groups. It's a bit of fluff padding, but it's nice to have it included nonetheless.

Overall, from my readthrough, would I say Dogs of WAR warrants a purchase? Well I don't like making definitive statements without a playthrough and I hope to do that next week (I'll be sure to tell how that goes), but I will say that if you plan on getting Barbarians of Lemuria, the two-for-$10 bundle on RPGNow is pretty hard to beat. Otherwise, if you really like the A-Team or, unlikely as it may be, if you're a Bolanverse fan like myself, then there's really no question that DoW is worth the $7.50 in PDF. It's a rules lite system that looks like it does exactly what it advertises, no more, no less.