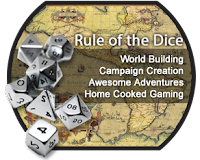 What is the most fun part of being a GM? Creating the worlds your players inhabit? Crafting the story they will play out? No! The most fun part, as any good GM knows, is slaying the PCs in the most horrific ways imaginable. Sometimes with maniacal laughter.

But when the big moment comes and you are about to enjoy a chortlingly delightful TPK, you chicken out, or maybe one of your players begins to whine and complain that you aren't playing fair. Well, it's true. If you deliberately enjoy slaughtering the PCs that adventure in your world, you probably deserve to be called a bastard and a terrible GM. I know I do. 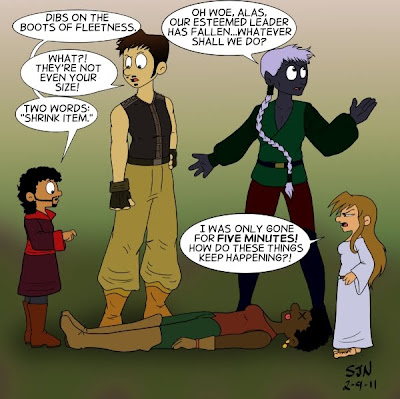 This is actually how most of my campaigns end.

But even assuming you aren't a psycho killer out to crush your players' will into a sticky red paste, you will most likely encounter the same problem: A player complaining you are being unfair, even if you play it completely straight and let the dice dictate the terms.

I've had a player who was an otherwise excellent player, but was incredibly protective of his characters, and assumed that any PC death was my fault for stacking the odds against him. I could have just toned everything down and made my game less lethal, but I wanted to try nipping the problem in the bud. After all, why risk it coming up again later?

It took a lot of patience on both our parts, but eventually we found a compromise that worked. It was a challenge, but worth it in the end. If you ever have a situation like that, perhaps some of what I went through could be helpful.

#1: Try to make sure everyone has backup characters.
At least a spare one or two rolled up in advance so they can be brought back into the game ASAP. This is even more vital if you run a death-heavy game using a more complicated ruleset like 4e or 3.5e.

#2: If they don't have a spare character give them something to do.
Let them roll up a fresh character and in the meantime let them take over an NPC or control a villain or two. Be warned, if the player blames another one for his demise this can only lead to disaster.

#3: Don't use insta-death.
There is a reason saving throws exist. Always give the players a chance to wrest victory (or at least survival) from the jaws of defeat. Just because Medusa can turn you to stone with one glance doesn't mean you should automatically kill your players for not shining their shields in advance.

#4: Give problem players a more satisfying finale.
Even in 3.5e and 4e death can feel somewhat permanent, but to help prevent tantrums try to make sure that a player's PC isn't just forgotten the minute it takes a fireball to the face. Have an NPC reminisce about them for a minute, take a second to hold a little eulogy, or come up with something so that the player doesn't feel his/her character's death was a waste of time and didn't contribute anything to the party.

#5: If all else fails, hand these out at your next game.
I guarantee a chuckle or two, especially if you fill in the details with a bit of flavor. :-)

What about you? Have you ever had a player entirely unwilling\unable to handle PC death? How did you deal with it and how did it affect the way you run games?