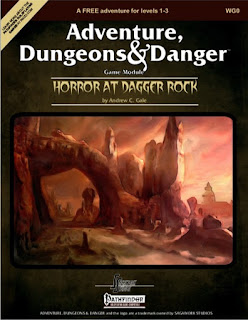 (Disclaimer: When writing reviews I don't bother with a numerical rating. I give my thoughts and opinions on a product, no more, no less. I suppose you could call it an "overview" rather than straight review. If you really want some kind of verdict, skip straight to the bottom where I list pros and cons. I should also warn that spoilers are inevitable though I shall try to keep them to a minimum.)

I had four players who had never played 3.5/Pathfinder, but who all wanted me to run them a game when the holidays ended. Being at a loss as to what would be best to run for them I resorted to looking for a cheap/free module I could toss at them while they learned the basics. Free, as always, took precedence, but then I'm cheap. Yes, the kind of cheap that hasn't bought a new article of clothing for nearly three years.

And why bother when consignment stores have what I need? But I'm digressing...back on topic.

So I went with The Horror at Dagger Rock by Sagaworks Studios. It's a little horror gem by Andrew Gale and I selected it not only because of the price (Free!) but also because it was more sandbox-y and open, which I felt would be a good fit for my players. That should be enough to turn off anyone seeking a lengthy dungeon crawl, but I'd advise anyone with an interest in nonlinear gameplay to keep reading.

The first thing anyone reading the module will notice is that it has only a vague beginning and an ending. There is no sequence of events to take your players from point A to point B. This is not a series of endless combat encounters. This is the skeleton of a story, and the players will provide the meat just as much as the gamemaster. And if those players get stuck, there is a helpful list of potential events to guide the plot in a non-railroading sort of way.

The module is broken up into a couple of segments. A lovely keyed map of the town where the adventure takes place, several special keyed locations, a keyed map of the mine (the sole 'dungeon'), and a couple pages on the new foes the PCs will encounter. No artwork other than the maps, but that's a relief as it spares my printer's ink cartridges and will let me stretch them for another month (see: cheap).

The entire thing is written in an older style that will be familiar to fans of mystery/horror adventures. The PCs end up in a little mining town (how is left open, but several helpful suggestions are provided) and must solve the disappearances, murders, and general aura of evil that has overwhelmed the little town since a massive earthquake.

Sounds like a good ol' Elder God romp to me! And really, the plot and NPCs could probably be used for a Call of Cthulhu game without much trouble. It's eerie and filled with suspicious characters.

Possibly too filled. I had to do up a separate paper just to list all the NPCs and their personalities. And this was after reading the module four times. I also found a lot of the NPCs to be a tad underdone in regards to personality. The important few got quite lengthy descriptions, but the rest were blank slates with only information as to whether they want the PCs dead or not. Not a complaint necessarily, but it does mean a little effort should be expended beforehand to flesh out the NPCs, especially if your players want to get to know any of them better.

So The Horror at Dagger Rock is not intended for the novice gamemaster who just wants to jump in with little to no work. Sure, it provides plenty of suggestions (all excellently written), but it does rely on a lot of improvisation and skill on the part of the GM. Fortunately the setting is generic enough so that I barely needed to alter a thing to fit it into my campaign world.

The combats are mostly scaled to the recommended party of level 1-3, though two of them are rather challenging and may require some tweaking depending on the party make up. I know I had to drastically alter some of the encounters when one player left the game, leaving me with one fighter-type and two support. But it's a testament to both Pathfinder and to the module that doing so was easy and did not break the flow of the game or cause it to lose tension at all.

The open-ended exploration lasted for several exciting sessions. Even though the plot itself is nothing ground-breaking (it has plenty of Lovecraftian potential, but nothing a well-read fantasy/horror buff couldn't put together) and there is a little bit of effort needed to help flesh out the multitude of NPCs, I find it impossible not to recommend checking this module out, especially if you like sandbox adventures. It can also make for a heck of a campaign starter if used properly. And could even be adapted to play in an older edition of the rules with a bit of patience with the monsters.

The author is working on a semi-sequel adventure and is, in effect, using this initial module as free advertisement. I've gotta say, it's worked for me. I'm very interested in the next installment. Even if it means my cheap self shall have to pony up a couple of bucks for it.

Cons: NPCs could use a little more flavor; not for the beginning gamemaster.