May 16, 2014
I've decided to write a series of  posts that deal with some of my favourite table top game mechanics.  To start, I'm going to go back to one of my favourite things about DnD: The dice.
There's always been something thrilling about rolling polyhedral dice other than d6's.  Maybe it was my little rebellious streak as a kid, or just a fascination with shapes other than cubes, but I really like funky dice.  So this leads to the first game mechanic to discuss: Custom dice.

There have been a lot of games in the last few years that have custom dice.  While these games could be played with regular d6, and then have you convert the number to some other meaning, the games tend to be... slicker with the customized ones. 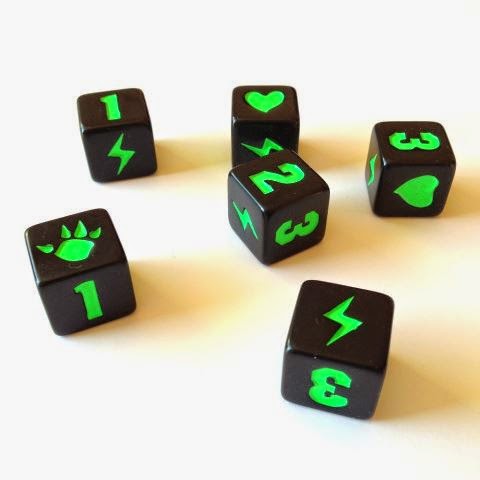 My first example is King of Tokyo. The dice are rolled three times each turn . After each throw you choose whether to keep or discard each of the six special dice (a la Yahtzee).  Triples of the numbers score victory points.  The claw is an attack to other players, the heart regenerates health (duh!) and the lighting generates energy that can be spent on creature upgrades / powers. Whatever you have at the end of the third roll, you allocate damage, collect your energy and take any victory points.  It's a great game, especially with 4 players (can be played by 2 to 6).

Next is Betrayal at House on the Hill. This game will probably show up in a few other game mechanics posts, because it has a lot of innovative stuff going on.  For the dice portion, what is interesting is that they are d6, but only go to 2.  How does that work? Glad you asked.  There are two sides with 1 pip, two sides with 2 pips, and two sides that are blank.  These are the first d6 you can roll a 0 on that I've ever seen.  The dice are used as skill checks and for combat.  Your characters stats range from 1 to 8 plus any modifiers from items you have, and you roll the corresponding number of dice. 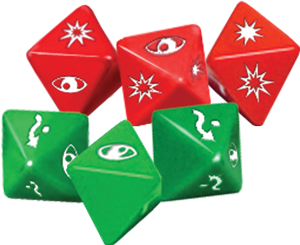 A game I've mentioned is a previous post is Star Wars: X-wing miniatures game.  The dice in this game have no numbers, just symbols. The attacker rolls the red d8, the defender rolls the green. Both explosion symbols (hits and critical hits) are countered by the swerve arrow symbol (dodge).  The eye symbol (focus) allows the player to change one result, provided they chose focus as an action earlier in the round.  The number of dice rolled is dependant on the character and ship stats, as well as their position in relation to the other ship.
﻿﻿﻿﻿﻿﻿﻿﻿
﻿
There are a bunch of other games, like Cthulhu Dice, Zombie Dice, 12 rounds, First and Goal, 303, Alba Longa, and the list can go on and on.  Plus good ol' Dungeons and Dragons.  I do remember getting in to fights as a teenager because our GM had a real d100.
But then that was half the fun - teenagers love to argue, just ask any parent.

Any custom dice games you love?  Suggestions of what other game mechanics you want to see discussed?  Let me know in the comments!﻿﻿