May 20, 2014
(In honour of my Tenth Wedding Anniversary, my lovely wife helped co-author this post. She wrote all the funny jokes.)

With the recent deaths of HR Giger and David Trampier, I've been looking closely at the artwork in games. Sadly, I've found that a lot of it is not very good. 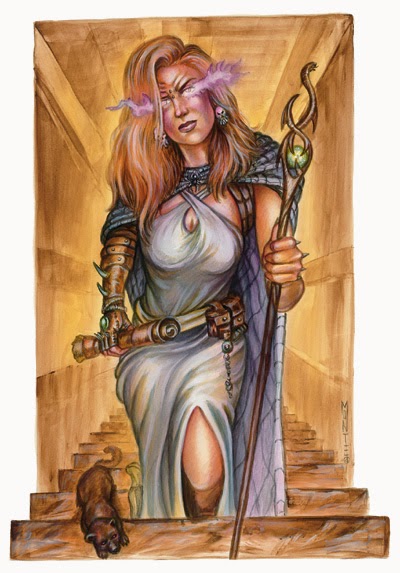 Moreover, the one place where game companies should strive to put their best art is on the covers of their books. I mean, this is the first thing the audience is going to see. It should convince them to buy the damn book. Instead, I've found that it compels them to run away screaming. 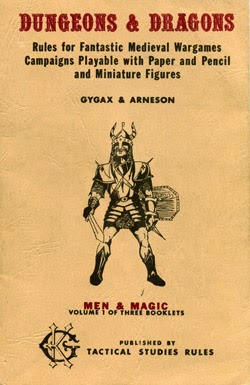 That "Fighting Man" looks like some kind of badass hobbit. My wife thought it was Axl Rose.  I suppose Axl Rose kind of looks like a hobbit.  I guess they could be excused on the grounds that this was the first RPG book ever published so they didn't exactly have a lot of experience with this kind of thing.  Surely their next attempt would be bet-- What the fuck is that thing?  Is that a beholder?  That is the most harmless and pathetic creature I have ever seen.  Is it...is it wearing lipstick?  Is it a goth? It's like the Robert Smith of beholders. Does it want to fight me or read me the poem it wrote about a dead bird that it found?

All that said, I think a Goth Beholder would be an awesome monster to add to the next version of D&D.

Other attempts at putting monsters on their covers did not fare much better... 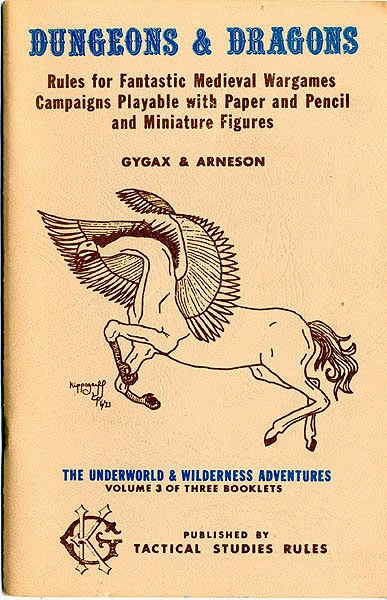 I thought this was a pegasus, but the longer I look at it, the less sense it makes. It's like a M.C. Escher painting. Is it some kind of griffon? A hippogriff? Why does it's neck run directly into its beak? How does it see? Since it's shaped like a horse I assume it must walk on four legs, but how the hell does it walk on those weird arthritic chicken feet? Is it in pain?  This is not something to be defeated. This is something to be euthanized by a vet for large animals. 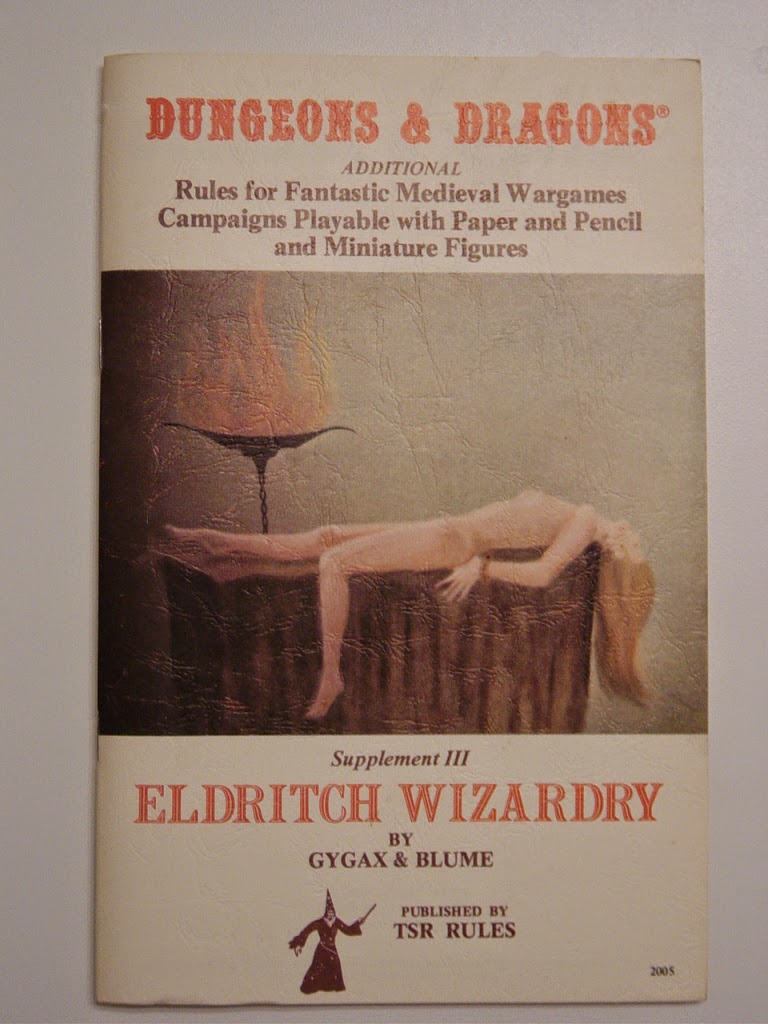 Were they planning to sell their books on the top shelf of magazine racks at gas stations? I know fantasy pulp fiction has a long history of gracing their covers with sexy ladies, but this doesn't even pretend to be anything but gratuitous nudity. There's no evil wizards, no dragons, no hero trying to rescue the damsel -- just a straight-up naked woman laying on a rock. I wouldn't be surprised if THIS is what agitated the bible-thumpers. Its hard to defend the relevance of this cover to role playing.  Apart from the enduring relevance of boobies, obviously.

Let's jump ahead a few years to a different gaming company and a different genre. How did Fantasy Games Unlimited handle an epic sci-fi game? 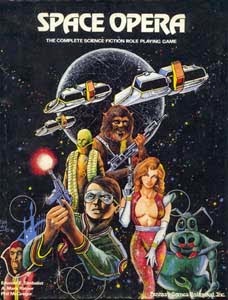 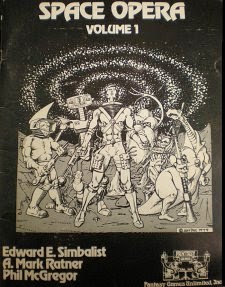 Poorly.They handled it poorly. I don't know which of these covers came first and frankly I don't think it matters. Neither is an improvement on the other. The one on the left went for a Star Wars-kinda theme and failed miserably. That bug alien looks like a dog that got run over a truck, while the chick is obviously a little soft in the head. The buttons of her shirt just busted, but instead of trying to hide her boobs she's covering her crotch for some reason. Those spaceships look like the plastic doohicky I use to cook my eggs in the microwave. As for the black & white cover, dude in the centre's head is obviously exploding and the rest of the crew just shat their pants. 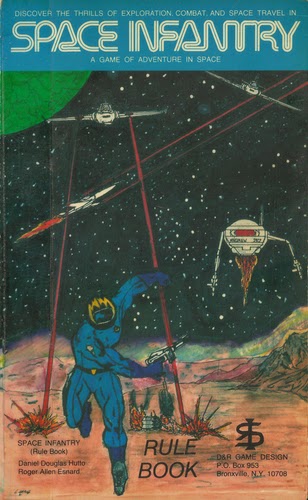 I don't know what's more offensive about this cover: The fact that it was obviously drawn with colouring leads by a 9th-grader (and I actually know 9th-graders who can draw WAY better than this), or the fact that the title of the book is impossible to read. Anyone up for a game of Space Infanmry?

Here's a fantasy game that I've never heard of: 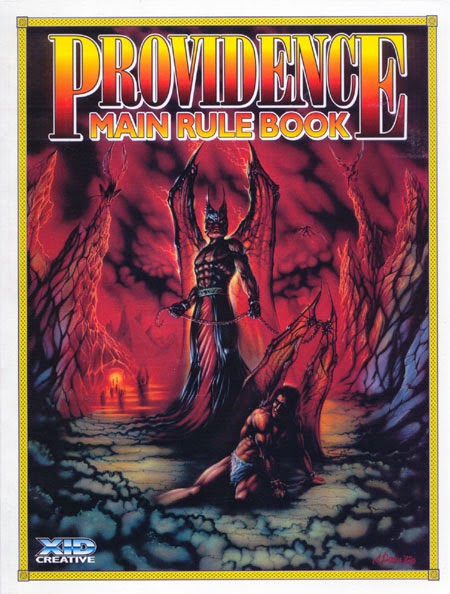 Overall the cover is meh (except for those weird piercings holding Satan's sex slave's wings together - those are stupid). The thing that really pisses me off about this cover is that the sex slave doesn't have any feet! They're not obscured by debris (Rob Liefeld, how you doin'?), or chopped off and bleeding, they're just... gone. His right leg literally just fades out as if the artist got bored and forgot to finish his foot. You spent all that time detailing those rippling muscles in both dudes' arms and chests, but you couldn't handle a goddamn foot? (Actually, neither guy in the photo has feet. Maybe the artist really does suffer from Rob Liefeld-itis).


Here's Barbarians of Lemuria, which has several different covers due to going through numerous PDF and print versions in the last few years. A couple of the covers are actually pretty good... 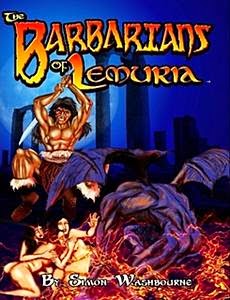 ...this one, however, is not. It appears that a big blue demon is interrupting a lesbian orgy and... something is coming to their rescue? Maybe? I have no idea what that thing is with the sword. It may be the Ultimate Warrior, but I don't know why his calf  muscle is bigger than his head. Fuck, I'm a big wrestling fan and I've seen a lot of muscleheads, but I've never seen anyone who puts so much work into pumping his calves up to the size of Cooper Minis while remaining satisfied that he has the arms of a little girl. 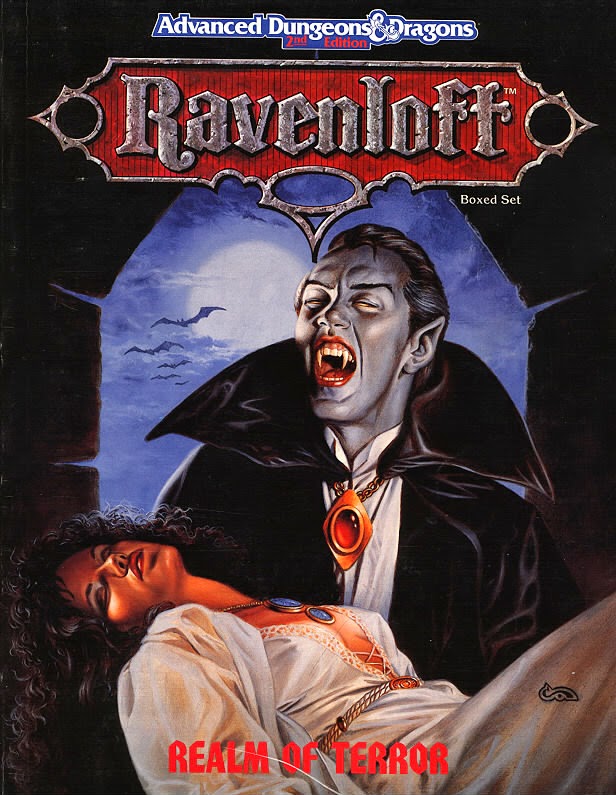 Don't get me wrong, Ravenloft was an important and influential game. But have you ever really looked closely at that cover art?What is going on with that vampire dude? He doesn't look angry, or ecstatic, or even scary. He looks like he's wailing out the high note in a hair metal power ballad. Seriously, the dude was jamming to "Every Rose Has Its Thorn" and his fucking guitar turned into a passed out drunk chick.

I could keep going, but I'm going to have to stop for today and leave you hanging for Part 2. Trust me, there are plenty more terrible, awful covers to come. Are there any particularly bad ones you'd like to see included? Don't worry, the Avalanche d20 covers will definitely be making an appearance.