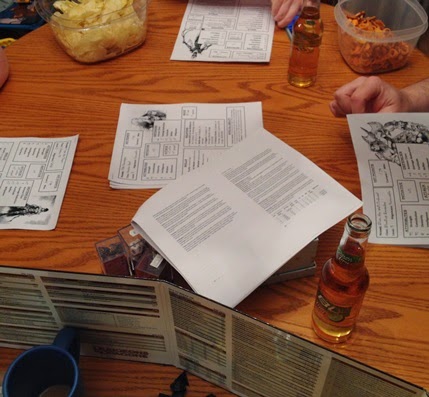 Saturday night was the world premiere of Splatter-Elf: The Role-Playing Game. I recruited three players (my wife, her sister and her husband) to run them through a short adventure to get a feel for the rules and the setting. I learned many things from this session about the game, my skills as a game master and the nature of human behaviour.

I was slightly disappointed by two of those three topics.

Seriously though, overall it went pretty well. Let's get right down to business.First the Fun Stuff. No game is complete without some ridiculous stories, so I had to share a few:

1. Lepers, Aggressive
The group killed alot of lepers. Like, alot alot. I established that the town was plagued by violently aggressive leprous beggars, but rather than just give them a few coins and scare them off, the party fought them to the death. Every. Time. Whenever one of the group left the town they kept getting assailed by more and more lepers until they were swarmed by a pack of fifteen of them. Still the party refused to flee, and eventually cut them all down after a long and plodding battle (even after the lepers gave up and tried to run away). Of course, the bloodlust berserker may have ended up contracting leprosy himself after bathing in all that blood.

2. The First Time in Years Anyone Cared About Encumbrance
The crew were suddenly worried about being encumbered by too much treasure, so they had to divest themselves of some coins (especially the one who spent the first part of the session carrying ten pounds of gold in her brazier). The splatter-elf and the blood mage went out into the woods to bury theirs (and had to fight more lepers to do so of course). The berserker took a different route. In order to lighten his pockets, he spent as much money as he could on whores. At least he didn't contract any more diseases (the leprosy was more than enough).

3. That Spell Doesn't Do What You Think It Does
The face on the blood mage's player when she cast Thromboné's Intestinal Lasso was priceless. To be fair her state of shock and disgust was probably my fault. On her character sheet, the shorthand spell description read:

However, here's the full description of the spell:

"The caster reaches into his abdomen and withdraws a length of his own intestines, which he then uses as a whip against an opponent within range. Make an attack roll + caster level versus the target’s Reflex. Damage is as per a whip (+1 damage), and it may be used for disarming or tripping attacks.

The sight of a blood mage casting Intestinal Lasso is horrifying to those who have never witnessed it. The intestines magically retract and repair themselves after the spell is completed, though it is very uncomfortable (1 damage to the caster), and the mage will usually suffer from diarrhea a few hours later."

After I read that there were quite a few uncomfortable faces and questions about "WHY DOES IT DO THAT? WHO THE HELL WOULD CAST THAT?"

Side note: That spell was actually inspired by the Godfather of Splatter-Elf himself, Philip Overby.

4. The Catfish Was Named Ogopogoagogo
We had only one character death, and the player chose to roll on the maiming table instead of letting go of her character. She fell off their boat and was attacked by a giant catfish. The roll called for a punctured lung, but the player suggested it bit her boob off. I think she was probably kidding but the rest of us wouldn't let it go after that. So yeah, a giant catfish ate her boob. At least it would leave more room in her bra to hide coins.

Here are the more important takeaways, reminding me of some lessons I should have long ago learned as a Game Master, as well as a few things I need to work on with Splatter-Elf.

1. My group loves to fight everything. They go by the motto: "If it bleeds, we can kill it." This is not a bad thing for Splatter-Elf as the game encourages lots of butchery. The problem arose from the fact that a few of the encounters I set up were totally meant to be avoided and NOT fought through with reckless abandon. It wasted a lot of time and bogged the game. At least it gave us a chance to test out the combat rules. Of course, had they not repeatedly tried to kill the lake monster maybe the blood mage wouldn't have nearly been bitten in half, but these are lessons we must all learn.

2. I made the adventure a little too long for a one-shot session (especially taking point one from above into account). Because they ended up fighting everything they didn't quite get to the end of the adventure, which is too bad because I had a couple more really interesting encounters I wanted to try. I should have known the players were going to try and stab everything and planned accordingly.

3. My group is PERFECT for splatter-elf, not only because they love to fight but because they don't trust anybody. They're distrustful and will do anything to save their own skins. The splatter-elf character stabbed the HOUSEKEEPER in the neck when she turned her back on them. They found a wounded man who had information about the keep they were going to explore, but instead of talking to him they tossed him into the lake as a distraction for the lake monster. Grand old time all around.

4. I may have to tweak the attack/damage/hit points a little, because it's very swingy. Or maybe I'll leave it as it - it certainly makes combat more chaotic and dangerous. I won't go into details here because that's enough material for a whole other post.

5. Because the game hovers in a place between the simple rules of old school D&D and the super-powered characters of newer editions, the game feels like it's in a weird undecided area. Does it want to be full of gritty, slow battles without a lot of special powers kind of game? Or does it need to be an over-the-top, triple somersault into a whirling death attack kind of game? My current group definitely leans toward the super-powered over-the-top style of play (the berserker repeatedly asked why he couldn't attack more than one thing at a time), but I do love the simple elegance of old-school design. My first thought is to build two versions: The first version just has the basic classes as outlined previously, with each class having one or two unique abilities that make them stand out. The second version would add a feat-style system, allowing the characters to gain a special ability ever level or two. Same game, but the "advanced" rules would add a layer of kick to it.

Anyway, that was the story of the first-ever game of Splatter-Elf. Hope you enjoyed reading and any feedback would be welcome.