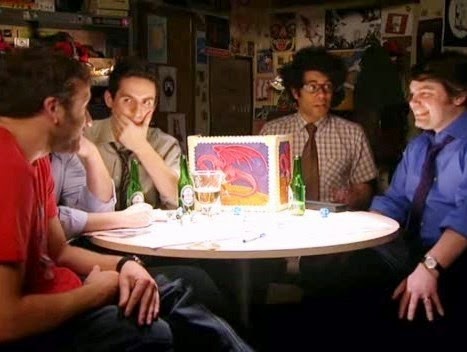 Last weekend, I hooked up with Rule of the Dice contributors Jason and John, as well as our resident kook Dave, to play a Google Hangouts version of John's D&D hack. (See Jason's post for more details about the game). I realized shortly after we sat down that this would be my first time PLAYING an RPG live at a table - not GMing and not play-by-post - literally in years.

About 4 years ago I played a bit of 4th Edition Encounters and Living Forgotten Realms, which... is not role-playing. It's rolling some dice, waiting twenty minutes for everyone else to argue about the interactions of their ridiculous powers, and then rolling a couple more dice when your turn comes around again. It was a grinding slog most of the time, but I played happily because it was my rare chance to sit on the other side of the screen and to create stupidly awesome (or is it awesomely stupid?) nonsensical rangers.

The last time I played before that was I believe in 2002 when Jason ran a one-off session where I completely dicked him around the whole night acting like a jackass (if I haven't apologized for that before... yeah, sorry).

(No really, that was an honest apology, I was totally a jerk)

But last weekend we gamed and it was eye opening for me. I've been playing RPGs for over 20 years, and I've Game Mastered 95-98% of every game I've been involved in. Don't get me wrong, while I do love GMing I've decided I may never do it again. Sitting on the other side of the table is so much better.

1. Way Less Stress
So here I was Friday night, rushing to get signed on at the appointed time, frantic to get the game started when it hit me: What was I rushing for? I had nothing to prepare or get ready. Signing in and grabbing my character sheet was literally all that I had to do. I didn't have a ton of notes to collect, stuff to re-read, rules to look up. My RPG experiences are usually hours of pre-game prep, wondering if it's going to work, worrying the whole time if people are into it, and then wondering afterward what I could have done differently and kicking myself for the parts I screwed up.

Friday, I was able to sit back, relax, and let someone else do the heavy work. I had time to casually eat a bag of Doritos AND had a chance to Tweet about the game as we played. It was brilliant.

(For the record, John seemed perfectly relaxed and way more comfortable than I usually feel when running a game. Either he's a lot better at this than I am, is better at hiding his frustrations or realizes this is just a game and doesn't take it too seriously - whatever it is, kudos to you, sir. You're a better man than me.)

2. Way Less Work
I kinda hinted at this in the previous entry, but this one should be obvious. GMing is a lot of work. Work that often feels more like doing your taxes than playing a game. You have to prepare - whether that's creating your world, writing your encounters/adventures, coming up with your own rules, whatever - and it takes work and dedication. Hours of pre-game prep. I try to wing it and improvise when I can, but I worry too much about making the game seem polished and put together to leave it to chance. I feel like I need to prepare for every eventuality (I know, I know, it's impossible) and inevitably end up writing pages and pages of content and the players usually skip over 80-90% of it.

For Friday's game, I wrote up my character in about 20 minutes weeks ago, then completely forgot about it. I didn't have to look at it again until I printed the character sheet 5 minutes before the game. It was like I was in heaven. I don't want to insult John by saying I didn't think about it or get ready for his game or anything, but it was truly such an unimaginable relief to go in and just play. Prepping a game is a ton of work and I would never imagine to not appreciate a GM's effort (except for Jason in the earlier example), but man, dude. Sometimes it's nice to not do anything.

3. It Actually Feels Like A Game
I laughed a lot. I joked around and made an ass of myself (Jason, Dave, sorry if I was a dick to you or your characters). I played with trying to give my character silly accents (haven't quite found the right one yet). It felt like it wasn't a big deal if I had to get up and use the washroom or deal with some outside issues - my stepping away wouldn't necessarily make the game grind to a halt. I didn't have to keep track of every detail of everything that was going on, there was no book-keeping or traffic direction. Part of that was because we had four experienced guys who knew what they were doing and knew the rules reasonably well, but a bigger part of that was because I didn't feel responsible for the good time of everyone at the table.

I've said before that (several times, actually) I believe it's everyone's responsibility to make sure everyone else has fun, but the GM carries the lion's share of said responsibility. The GM has to make sure everyone is engaged, that everything makes sense, that the action keeps flowing. As a player, you don't have to do that so much. Sure, you need to be respectful and open minded and not try to purposefully de-rail the game, but you have WAY fewer moving pieces to worry about than the GM, so you can concentrate on what's in front of you and having fun with it.

4. It Shows Me How to Be a Better GM
I'm sure that my weaknesses as a Game Master stems from not playing enough under different GMs. Like any game or sport, you have to play with people who are better than you in order to get better yourself.

This is going to make me sound like a jackass, but bear with me because I have a point: If I had run the game John did on Friday night, I would have been extremely disappointed. In nearly three hours, very little happened. We visited one location. There were two NPCs. There was one very simple combat encounter. If it was me, it would have felt like we didn't accomplish anything (probably because I would have had 20,000 words of material we didn't get to).

But on the other of the table, we as players had a wonderful time. We bickered and joked and played our characters. We found entertainment in all the little things, and put importance in everything we did. As a GM, I always worry about making sure the players have a goal, and obvious steps they need to take, and interesting, important things they should encounter along the way. But for the players, every door, every exchange, every weird noise - it all seems important. We latch onto what we think is interesting and that becomes the memorable part of the adventure. We spent twenty minutes trying to figure out if any of our characters new how to read or not, for frigsakes, and it was hilarious. The GM is responsible for throwing some stuff in front of us, but the players are responsible for doing something with it.

To John's credit, I don't think he was disappointed and I hope he recognizes that we got a lot of enjoyment out of those three hours. I can pretty safely say that it was one of the most satisfying games I've played in years. And all we did was kill one bad guy, which I had no hand in as I spent the whole battle tied up on the floor.

Role-playing games are weird. But they can still be really, really fun.