With but a Whimper (The Death of Another Campaign) 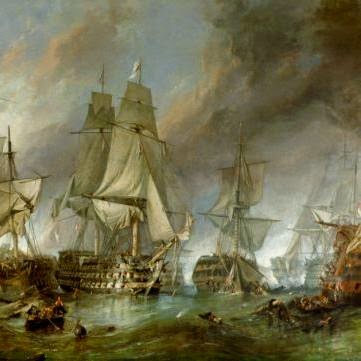 I am terrible at ending campaigns.

1. The party has to protect the actor during the performance. Hopefully some of them have to get on stage and take part.

2. The will be attacked by assassins trying to kill the actor, and wild mountain men on the way to the performance.

3. After the performance when they leave with their pay they will be attacked by pirates.

That was it. I thought it would take a couple of weeks of real-time and be a short and hopefully fun little scenario. I had no idea it would blow up into the huge drama that it did.

It turned into a major political insurgence. A king was killed, a princess kidnapped, a religious revolution instigated. Lost family members returned. One of the party betrayed his friends, and another died trying to be a hero. Yet another nearly died and lost an arm when he sacrificed himself to save the others, but survived because the remaining party members actually went back for him. I wasn't expecting that after all the other shit that happened.

Sounds pretty impressive, when I put it like that. The issue was that after all that cool stuff happened, with the group split and no immediate next course of action obvious, the game kind of fell apart. I could have forced the narrative along and rushed the party into the next adventure, but I really wanted to see where it would go, what the players would do when left to their own devices. Unfortunately I think they felt a little lost and overwhelmed.

The thing is, which I don't think the players realized, was that they had created all the awesomeness that transpired. As I said, I had a fairly bare-bones script to go by. Everything else that happened was in response to their actions, so I was waiting to see what next crazy thing they would do.

The political uprising came about because the players (rightfully) questioned why the assassins were trying so hard to kill their target, even being willing to kill themselves in the process. I determined that they weren't simply trying to kill the actor, but to destabilize the government, and had the opportunity to wreck havoc because the king and numerous important nobles were attending the performance.

The increasingly stupid conflicts in the theatre scenes were my (poor) response to keep the tension up during a lull in everyone's writing.

The religious revolution was in response to the cleric helping some of the survivors and then preaching about his god. Because the desperate refugees were so despondent and replied favourably to his promises of hope and salvation, he continued to stir the pot until he started a riot (a well-timed divine "sign" provided by the party's illusionist didn't hurt, either).

The tension with the party's patron was because they thought he was a bad guy, even though he was way more honourable than they were and was actually trying to do good things while the players subverted him at every step.

The character that died did so because he chose to save the princess all by himself without seeking help, and refused to retreat despite several opportunities to do so. While on the surface this seems incredibly stupid, it made sense in character because he was not only developing feelings for the girl but he had a long history of distrusting the rest of the group due to the stupid decisions he felt they constantly made.

The long lost relative showing up was in response to a throw-away couple of lines mentioning how one of the character's uncles may have been a PC from a long, long ago game. The player was pretty excited about this, so I decided that the pirate who was lying in wait for them would turn out to be that uncle, long thought dead. Unfortunately, when two of the PCs stole the party's ship and took off on their own (in-character they were fleeing the riot, out-of-character it was meant as a joke), they were woefully unprepared to do battle with the pirates. They made some very poor tactical decisions and had their asses handed to them, but ultimately surrendered their valuable cargo and threw in with the pirates.

And that was it. The two guys who fled are now sailing away with the pirates while the others are stuck without a ship or a clear direction (though I did give them several clues to what happened, as well as a couple of options of how to follow them). I guess it's as good a place as any to stop, and we're planning to start a new game in a different genre soon.

After writing this out I realized that maybe the game didn't end as badly as I thought. If this was a fantasy novel series this would be a pretty good cliffhanger ending for book one. The Fellowship is broken, the world is turmoil, and the future is uncertain. Maybe one day we'll come back to write book two. How will the heroes get out of this one?

The more I think about it, though, the player characters in this story really aren't the heroes...

Oh, and one last spoiler, for the players who were left behind: After Ulrich and Wicket gave the cargo to the pirates, they burned and sank the Stardust Memories.

Just thought you should know that.