Soundtrack to the Weird West 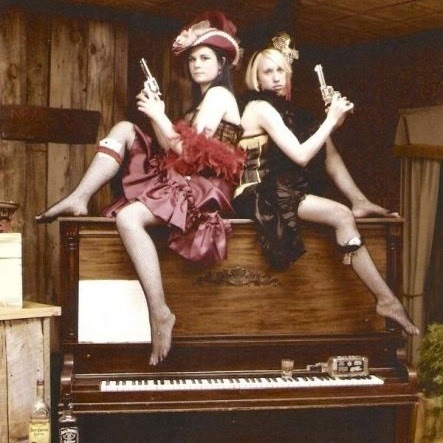 So that game I was bewildered about last week is happening. I still don't know if it's going to work, but I come armed with all the great feedback and suggestions that I received on the topic. If it flops at this point I have no one to blame but myself.

Apparently we're running Deadlands without calling it Deadlands or even realizing we had chosen it. When we were deciding what kind of game to try I told my group that I was willing to run one of four types of games:

1. Sci-fi (more appropriately, space opera, a la Star Wars/BSG/Serenity)
2. Zombie survival/horror
3. Western
4. Pro-wrestling (knowing no one was going to do it)

Of course, we ended up with a sci-fi/zombie/western hybrid. Just couldn't shoehorn the wrestling in there. Through brainstorming (yay, FATE!) we ended up with a vaguely wild west setting with supernatural elements, heavy on steampunk and airships (so the one guy who wanted to play Firefly could still get to be Captain Reynolds).

I didn't want to just run Deadlands because I'm not at all familiar with it, plus I really like that everyone is getting a chance to contribute to our weird little mash-up of a world. If anything it's turning out to be more of an homage to the world of Stephen King's The Dark Tower, but that works, too.

Anyway, my point today is that we're still shaping and creating the style and mood of the game, and I thought some appropriate music would be, um, appropriate. But what kind of music fits with a weird west/steampunk/dark fantasy setting?

Here are a few I've come up with. More suggestions are welcome and encouraged!


Anyone who calls themselves "gothabilly" or "hellbilly" is probably appropriate, which is what puts these guys on the top of the list. Their videos certainly have the look we're going for. The music might be a little too heavy for some taste (I would prefer something a little more classically western for this setting), but it's a damn fine place to start.


These guys are f*cking awesome. Instead of taking classic downhomy stylings and metaling them up (how many words did I invent in that sentence?), they do the opposite by taking hard rock and metal and arranging them into acoustic bluegrass numbers. It adds a whole new layer of oddness and weirdness (their cover of Enter Sandman is downright creepy in a way distorted guitars can never achieve) that fits perfectly into the setting. I think.


You can't go wrong with classic spaghetti westerns, and in that case you can't do better than Morricone. The Clint Eastwood "Man with No Name" movies, Once Upon a Time in the West, The Ecstasy of Gold - his soundtracks are iconic, and they have an epic, larger-than-life grandeur to them that totally works.


A British electronic-blues-gospel-country band shouldn't work, but that's probably why it does. And it works so, so well. It's got a touch of funk that kind of throws you for a loop in a western (I can't picture Clint Eastwood or Roland Deschain shooting a guy to this soundtrack... or can I?) but if you crank up the Steampunk a few notches this becomes wildly appropriate.


I don't think this will work, I just really like this song. (CAUTION: Wildly NSFW)

So what about you, or faithful readers? What are some other good songs and bands that could score the soundtrack to a weird west/steampunk type of setting?