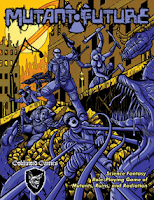 It creates a world where technology is gone, civilization turned into a violent, desolate wasteland of swords and mutants. The game lacks a detailed setting, but the implications are clear and easy to adapt to your own, more detailed setting.

The character classes are the first thing I noticed. They are a melding of the old and the new. The standard D&D statistics apply, though slightly altered in their purpose to fit the new setting (no more Dragon Breath save), and the creation is random roll. From there, you select a class, including Mutated Human, three different kinds of Androids, Mutated Plant, and Pure Human. Each has unique abilities and, honestly, you can play a mutated plant! A deadly daffodil! That makes the whole game worth it to me, but read on if you are still skeptical.

There's a huge list of random mutations, some beneficial, some...less so. But all are interesting and all make for varied and entertaining characters. Some examples include dual-heads (shades of Zaphod Beeblebrox?), classic mutations like teleportation, and some less common ones like the ability to throw grenade-like fruit as a Mutant Plant. See, mocking the daffodil was a mistake!

There's also a great list of technological items, though with the caveat that they should be used sparingly and with vague descriptions. And c'mon, the fun of finding a thermite grenade and not understanding its purpose can lead to all kind of joyous surprises down the road for any gaming group.

There's even a large bestiary included with plenty of familiar and original beasties. All of the enemies have great stat blocks and even some excellent artwork.

The entire game feels like a D&D mod on steroids, and that's a very good thing. It's immediately familiar to an old-school gamer, with its saving throws and descending AC, but features plenty of nice additions from modern gaming, like larger HP totals for starting characters and unified leveling tables. These additions help to simplify the game and make the entire thing more friendly for the first timer as well as the old grognard. Combat is less deadly at early levels than its D&D counterpart, though they are no less exciting.

Of course, Mutant Future has flaws, although none are too glaring. Firstly, there is, clearly, the potential for a nearly unplayable character to be created if too many bad mutations are rolled. There are also some seemingly unncessary Android types, though that's more of a minor waste than a real flaw.

There are also some segments from the rules that could have used a little more reworking from the original Labyrith Lord base to add flavor. And on the subject of flavor, the setting information is really quite minor and would benefit from some growth and addition. If a more detailed campaign setting were available I believe this complaint would be null, but as it stands it's very open-ended and requires some lengthy prep on the part of the novice GM.

The game plays smoothly, and is adaptable for many different styles of game, much like its parent system. PCs could easily explore ruins of old earth in a dungeon crawl, or they could spend countless sessions going from town to town in the wasteland, or even getting involved in the local political scene in the shattered remnants of the future.

Also included is a handy conversion guide if you want to play Labyrinth Lord with some Mutant Future options or vice versa. It's another nice touch in an overall package that is a loving ode to classic roleplaying games.

Mutant Future is available in free PDF form from Goblinoid Games (without the art) and is also available for purchase from Lulu.