Today, I will briefly continue my ruminations on Megadungeons, specifically three of the distinct advantages I've found they have.

A Megadungeon rarely, if ever, requires that the heroes travel far afield, and this makes it more easy to GM, as you won't need to consider every single faction, nation, and locale when you build your game. Even when using a purchased campaign setting, you'll find it can be a lot of work to enjoyably maintain all the various towns, cities, and NPCs you'll need, if you want to create a deep and compelling game.

With a Megadungeon campaign, you can focus on one or two principalities, developing greater detail for the NPCs, and even having an easier time of managing a more living world. Even when using the dungeon itself as a living world, with numerous factions and groups, it is a contained world, subject to easier laws than the round (or flat, your choice) world your characters inhabit.

It's hard to remember what that grizzled old blacksmith from the city six sessions ago might be doing now, but when the NPCs are from a more limited pool, you can do so much more to help create their backstories and their individual lives.

#2: A greater variety of location types in one area.

I hear you scoffing in the background! You're saying, doesn't this contradict point #1? How is a dungeon anything other than damp stone and smelly goblins?

The answer is ridiculously simple: Creativity.

No dungeon needs to be a dull collection of stone and dirt. With a little thought into plot, you can create a different theme for every level of your Megadungeon! Think for a minute, what about a cavern with a lush underground forest, and a tribe of peaceful Morlocks unaware of the surface world? Sounds like level 4 to me.

And it's not so hard as you would think to form logical reasons for these locations being in a dungeon, and by featuring different locales in one place, it saves on the tedious traveling segments where either the PCs spend a week or two at sea only to arrive safely, or are attacked and must endure yet another distraction in their pursuit of the main storyline.

#3: Easier to pick up and play for new members, and easier to put down for weeks if need be.

This is important if you have a revolving door policy to your gaming group. Can't make it one week? No problem, it should be easy enough to pick up after your character finishes sleeping off his hangover/cleaning out the inn's cellar/washing his hair. A few minutes to explain what new events have occurred in the plotline and no need to try and finagle a fancy way to have this absent character magically materialize with the other PCs when they are ready for their next adventure.

And on the other side of the coin, if you have to take a break from game-mastering for a while, a Megadungeon campaign is far easier to pick up again, even a month or two down the road.

So there you go. Three things to consider the next time you plan to start a campaign, and three reasons I feel a Megadungeon is worth considering. Next week I'll talk about something else, but I'll continue to pepper in these little Megadungeons thoughts, rants, raves, as I continually develop it.

Oh, and here's the first level of my current Megadungeon. It is currently unkeyed (working out two different versions of that) and ugly as sin, but hey, a blank dungeon map might be useful, so go wild with it. I'm using a rough 5-foot estimation for each grid square, but I've rarely cared much about fidelity in determining distances. Just click to see a higher-res version. 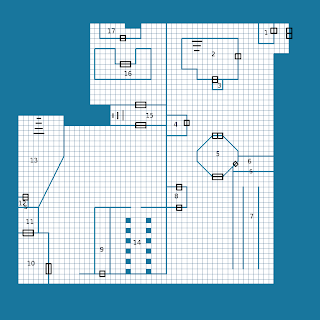