Last week I wrote about why playing RPGs via email is awesome. To recap - it's convenient, it's fun and it lets you do things you can't do in person. Sadly, however, like most good things in this world, PBEM (Play-By-E-Mail) also comes with its drawbacks.

So, as a follow-up to last week, please enjoy my 3 reasons why you should think twice before PBEM:

1. It takes a long time
In tabletop roleplaying, the DM describes the scene and the players respond immediately, and then the DM describes how they fail at their pathetic attempts at heroism. In PBEM, the DM describes the scene, sends it out, and then everyone waits. One guy is always sitting at his keyboard and replies 30 seconds later. Another guy (or girl) checks his email when he gets home after work and sends his response a few hours later. Yet another guy reads the message and then his S.O. calls and tells him he forgot about dinner at his/her mother's place and he had better get his ass over there or he's not getting any loving for the rest of his life, and then when he comes home he finds out that his dog ate the Mars bar he left on the desk when he ran out of the door and now he has to rush the dog to vet... and you see where this is going? I don't, because I forgot my point. 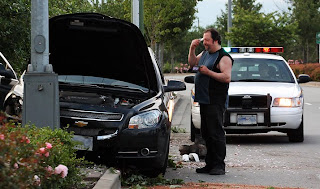 Yes, officer, I know I shouldn't be texting while driving, but you see my ranger just totally beheaded this goblin, so I was like trying to quip "Hey, it's okay, don't lose your head!" Get it? You're not going to write me a ticket, are you?
Oh right. Life happens. People forget to check/reply to email, and the game drags on. If you're an impatient person who prefers more immediate reward to your behavious, PBEM may not be for you.

2. It's a fuckload more work
This is probably my fault because of the way I run the game, but I find DMing a PBEM game takes an inordinate amount of time and effort. Not only do you have to write the adventure/scenario, but you have to describe, and write down, the results of the players actions (especially combat). When we play, I have my players describe the actions they want to attempt, but then have to determine whether or not they succeed, and then have to describe exactly what happens. It can easily take me 700-800 words to write out a single ROUND of combat. It's a good writing exercise, I suppose, but it eats up a lot of my time so I wish I could find a way to push some of that work back to the players. 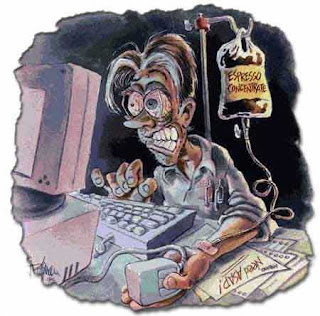 Wait, how many hit points did that goblin have left? Nevermind, where is the paladin? Is he still having sex with that princess? Did she make her T.T.C. check?
It's even worse then the group splits up. As I said last week, being able to split the party and give them information without the others knowing is a great story-telling tool. However, it also means you're now suddenly running three games. And if the players in those three games play at different speeds, forget trying to get them back together. While one group can scale a mountain, fight off a band of orcs and acquire a ton of background info in a day's worth of emails, another group can take a week to play out a simple exchange at the tavern. Great role-playing opportunity, great way to annoy the other players while they wait for you to catch up.

3. It loses some of the spontaneity and social fun of real game
Playing RPGs is not an exercise in accounting or a mathematical problem to be solved. Yes, I realize some people play it like that, and more power to you, but at its heart role-playing is a social activity, a shared storytelling experience, and a chance for people to hang out, eat junk food and have fun. A game loses most of that luster when it's filtered through the heartless, faceless, frigid nether regions of the internet. It's hard to describe - playing by e-mail is still fun, and it has it's advantages, but it's just missing... something.

This. It's missing this.
I guess it's the like the difference between cybersex and the real thing. Sure, one is safer, has that buffering layer of cyper-spacial anonymity wrapped around it, and is available twenty-four seven from the comfort of your home, office or (thanks to iPhone) public transit, but sometimes nothing beats the hot, sweaty, hairy excitement of personal interaction. And yes, that example applies to both gaming and sex.

So has anyone else reading this every done it? PBEM, I mean? Are there any drawbacks I missed? Any suggestions on how to get around the problems I've described?