My Favourite Games (That I Have Never Played) 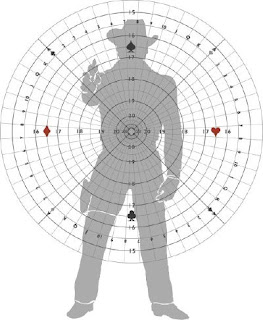 I've read a lot of RPGs in almost 20 years of gaming. No one can possibly play every game out there (unless you don't have a job, but even then there probably isn't enough hours in the day). I've bought, been given, or found free PDFs online for many games that I have read but never played. Many of them are forgettable, and most have been lost or given away over the years (I used to move A LOT, ask Jsalvatori) but sometimes I hold onto a game even if I've never played it. Perhaps I still mean to play it someday, or maybe it just has some really good art or background material, but for whatever reason I've kept it, and it still has a special place on my bookshelf even though space there is at a premium.

Let's take a few down and have a look at them, shall we? Here are my Top 4 Favourite Games (That I Have Never Played):

1. ACES & EIGHTS (Kenzer & Co)
If Star Wars d20 is D&D in space, then this is old-school D&D in the Wild West. Somehow, I have inherited a genetic disposition toward westerns from my father. (Have you seen the new True Grit? Awesome.) It has a sweet gunfighting system that uses a deck of standard playing cards to determine where your shot goes wide if you miss (you still roll a d20 on your attack roll). It has a deep character generation system and an immersive, well-researched setting. All that, and the rulebook itself is absolutely gorgeous.

2. HACKMASTER (Kenzer & Co)
It's 1st Edition D&D with attitude. How can you not love a game that has an entire chapter on proper dice-rolling etiquette, and 15-different variations of the fireball spell? Wizards of the Coast licensed the original D&D to Kenzer to create a game based on the RPG played by the characters in Knights of the Dinner Table, with the condition that they make it funny and a sort of parody (at least that's the story I heard). In case you're not familiar with the Knights of the Dinner Table, funny is not a problem. In what other game could a blind, mute, deaf and quadruple amputee gnome be a viable player character?

I know John doesn't share my taste, but I loved the new BSG TV show because it's a cross between two of the biggest influences on my formative years: Wing Commander and ROBOTECH. I love the combination of sci-fi space combat with paranoia and political intrigue. If I do ever play, I am going to make one of the player characters a Cylon, no doubt in my mind. And I'm not going to tell tell any of the players (including the Cylon) which of them it is. The system seems simple and story based, which is also something different that I would like to try. 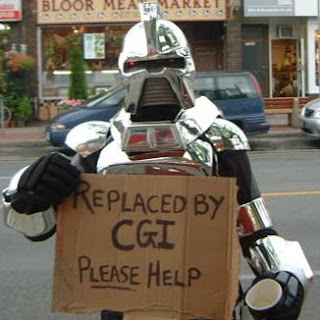 That's pretty fun... wait a minute! I know that neighbourhood! Toronto is being invaded by Cylons! RUN FOR YOUR LIVES!!!
4. WHEEL OF TIME (Wizards of the Coast)
I admit I'm not a big fan of Robert Jordan's work, and the RPG is really just a d20 variation, but it has perhaps the coolest magic system I've ever seen. While using the standard D&D magic level system as a base, it has a plethora of schools and sub-schools of magic, in which each caster has certain preferences and talents. Each spell can be cast at different levels, and casters can even attempt to cast a spell higher than their standard level, with great difficulty and at high personal risk. There's also options for using feats to modify spells, spell "rarity" to determine how difficult they are to learn, and rules for group casting and using physical and material foci to make casting those "over-level" spells easier and less dangerous.

HONOURABLE MENTIONS
(Or: Games I Have Only Played Once)

A GAME OF THRONES d20 (Guardians of Order)
Another beautiful book, though sadly riddled with typos and errors (I think Guardians of Order went out of business in the middle of publishing this). I love George R.R. Martin's A Song of Ice and Fire and the IDEA of an RPG based on it is a great one, but actually playing the game is quite difficult. Look at the novels upon which it's based: the main characters spend most of their time hundreds of miles apart, and are so different and lop-sided that it would make playing a game in the style of the book virtually impossible. Imagine a party made up of a king, an 8-year old boy in another city, a illegitimate soldier living in the frozen north, and a deposed princess in exile ON A DIFFERENT CONTINENT. It makes for great fiction, but slightly awkward gaming. 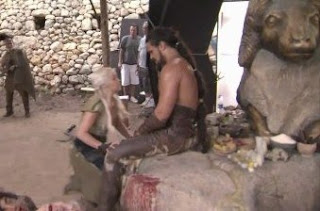 An important storyline from the book that may be difficult to role-play: a 13-year old girl is sold as a concubine to a burly, swarthy, horse-loving nomad. Yeah. Awkward.
CALL OF CTHULHU (Chaosium)
Yup, believe it or not, I've only played this game once. I borrowed a friend's copy to run a one-shot adventure, at the end of which two characters were dead and two more were insane. The fifth character spent the whole adventure going on a date. I've used elements from it for other games (and I am planning on stealing from it shamelessly to create a d6 Horror game), but perhaps my single favourite element was the skill system. You HAD to USE your skills in order for them to improve. Simple but brilliant. None of this automatically increasing when you level-up bullshit.

Has anyone out there played any of these games, and can vouch for their awesomeness? How about anyone else with games sitting on their shelf that they love but have never played? Perhaps it's time to take them down and out for a spin. Or at least tell us about them. Maybe you can find someone to play it with you.