My Favorite Game (that I never played) 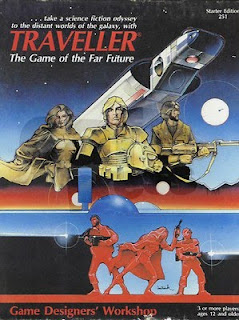 In a recent article, C.D. talked about some of the best games he's never played. We all have them, of course. Those games we wish we could play but, for one reason or another, do not. I have a large pile of them sitting either in PDFs or on my desk, but the one that has bothered me the most deserves a mention today.

The game is Traveller.

I've always been a Star Trek fan. There's something about the Space Opera genre that I love, even more so than fantasy, and finding a truly good system to use for those kinds of star-spanning adventures isn't nearly so easy as it is to find one of the billions of fantasy-based systems.

So when I finally broke down and got the classic Traveller rules from Drive Thru RPG, I was pleasantly surprised to find that here was the ultimate set of Space Opera roleplaying rules. Everything, all in one self-contained little package of awesome. Truthfully, I probably ought to have splurged and got the Mongoose edition, as I hear it's basically the same thing and a little more readable, but the old-school text was perfect to my eyes.

And for the past six months, it has been sitting, unused, on my hard drive. Why? Because, my current group doesn't care for science-fiction as a setting. Don't they see what they're missing?!

And it's a shame, because as far as systems go, Classic Traveller is right up there with 1e D&D in terms of grooviness.

It's more abstract than a lot of modern games, in that the dice require some interpretation, and has a lot of randomness, including the infamous ability to die during character generation. But never have I seen a game include so much, so elegantly.

The rules include sections for generating unique planets each with their own eco-system, detailed ship combat, information on building your own spaceships, a simple and yet fun trade subsystem, a decent set of pisonic rules, and the ability to do battle with fancy laser guns and primitive swords. Plus, Classic Traveller had real computers. You know, the type you had to code by archaic ticker-tape punch outs. 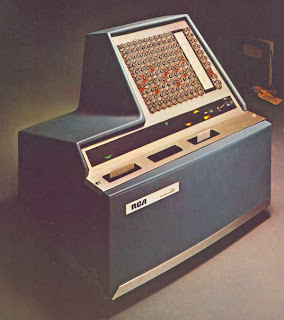 Look Johnny, it's...THE FUTURE!
And all of this clocks in at only 68 pages in the PDF Starter Edition (plus a few charts). It's a tad messy in places, and obviously modern readers will want a cleaner format, but it's all there. A universe of possibilities, distilled into an itty-bitty package. It's a mix of crunchy (calculating flight times will almost certainly require a calculator for the less mathematically inclined) and abstract (combat is short, lethal, and lacks the tactical finesse of, say, 4e).

It is a system that changes based around how frivolous or serious you want to play it. I've created characters ranging from a "hard" sci-fi researcher, addicted to a future narcotic, to a revolver-wielding anthropomorphic dinosaur. With no set classes or races, you really are limited only by imagination and tone. Of course, supplements added these things in, but to me the real joy is coming up with your own version of the universe, and with rules as easily adaptable as in Classic Traveller, you could be creating alien races as easily as changing one or two features. 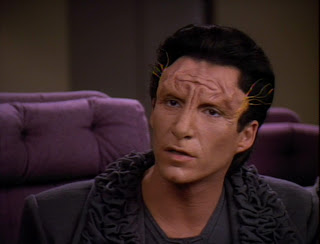 I've heard Traveller called the game that everyone talks about and no one plays. I really hope that's not an accurate description. How about it? Anyone else ever manage to play Traveller, any edition? If so, how did it go?