March 28, 2014
I love professional wrestling (which you probably know).  I love role playing games (which I hope you know, since I'm writing this on an RPG blog).  Fun fact you may not know: I hate writing reviews.  When someone puts professional wrestling and role-playing together though, I do have to talk about it somehow.

To be fair, this isn't a true review: the game is currently in "Beta Test," so there will undoubtedly be some changes between now and its final publication.  The rules are available right here, so check it out.  You can also support Nathan's endeavours at Patreon.  But since it's still a work in progress I don't think it's fair to be too critical - not that I can find much wrong with it anyway.  Personally I think this is an awesome game.

World Wide Wrestling is a fairly straight-forward yet surprisingly in-depth simulation of the wacky world of professional wrestling.  It is based on the Apocalypse World engine, which I admit I'm not really familiar with but works very well for a quick and simple mechanic to resolve actions.

At its heart this is actually more of a story-telling game than a competitive one. The premise is that the wrestling in WWW is, like pro-wrestling in real life, predetermined and "choreographed" by the participants.  You work WITH your opponent, not against him, to put off an entertaining match, just like in "real" wrestling.  The game master, called "Creative" here (a term that comes from the "Creative Department" of World Wrestling Entertainment, which you might also call the "booker" or the promoter for the company) sets up the interview segments and the matches, and decides who will win, but the players/wrestlers have to decide exactly what happens during those interviews and matches.  The goal is not to win the match, but to entertain the crowd and impress Creative to ultimately gain popularity with the crowd and advance your character's career.  This is great concept because most games portray professional wrestling as legitimate combat, but I want to experience it the way most Internet-savvy fans do these days: entertained not just by the action in the ring but by the goings-on backstage, both in-character and out.

Your wrestler has 4 basic stats: Look (his appearance and gimmick - very crucial to a wrestler), Work (his ability to make a match look good), Power (his strength and toughness) and Real (ability to work real-world story and emotion into the action).  Each one is equally important in its own way - you can gain fans and become famous in more ways than one.  The immortal Hulk Hogan would have a great Look score and pretty good Power, but an absolutely crappy Work stat, whereas someone like Bret Hart would have a very high Work score, but his Look and Power are middling. 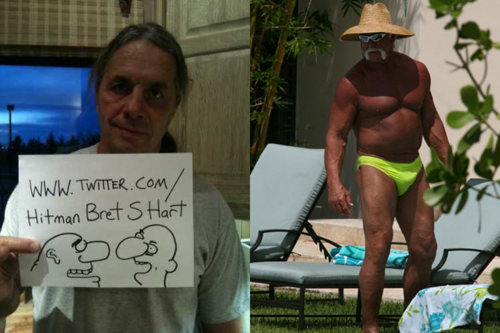 Sadly, today all of both men's stats have gone to shit.  Oh, how our heroes have fallen.

Another important stat is Momentum, a measure of your wrestler's energy over the course of the session (or Episode).  You use Momentum to increase your die rolls to pull off better moves, or to trigger certain special moves taking place. You gain more Momentum by performing certain other moves and having a high Audience score.  Obviously it's good to have a lot of Momentum because it will improve your actions throughout the show, and allow you to have longer and more entertaining matches.

During a match, you could decide you want to mess with your opponent by showboating and flexing your muscles.  This is a perfectly valid move that you can use to gain Heat with your opponent.  (Heat is a measurement of your relationship with your opponent, that can ultimately affect how much the audience gets into your match - the more they think you hate each other, the more they will enjoy the bout.) You would make a "Look" roll, and based on the result you would gain or lose heat.  Or perhaps you try to pull of a complicated and impressive maneuver or series of holds to wow the crowd - you would use a "Work" move with success again gaining the audience's approval. I love how there are different ways to "win" - it's not just about rolling initiative and attack rolls.  You can gain just as much advantage from doing interviews and how you interact with your bosses backstage.

You're ultimately trying to entertain not only the imaginary audience but the other players as well.  Since you're not competing against each other (at least not directly, though everyone is fighting to be the top dog in the company), a lot of the fun comes from watching what kind of creative characters, matches and interviews the other players come up with, much like watching real wrestling (wins and losses don't matter, it's how you get there!). 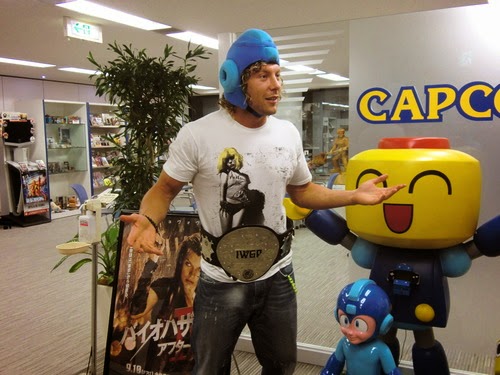 A particular mechanic that I love is that whenever a match is taking place, a player who is not involved is given "the microphone" (the rules suggesting using a prop, maybe even a real mic) to act as the announcer and call the play-by-play action.  The microphone itself has Momentum that the announcer can spend to "put over" the participants in the match and improve the action.  I think this is great because not only does it give someone who is not immediately involved something to do, but it adds an extra layer of strategy and gameplay as well as reinforces how important the commentator is to the wrestling match.

Finally, I'm not sure if or how much of this will be included in the final product, but the art-in-progress is fantastic as well. Gregor Hutton provided these cool, simple black & white sketches of wrestlers performing moves that are used throughout the manual that remind me of illustrations from old-school RPGs.  Ramon Villalobos provided beautiful drawings for the character templates which have a much more modern, comic-book type of feel.  Top notch stuff from both guys.

I'm not sure how much this game will appeal to non-wrestling fans, but for the niche market of wrestling-fans/gamers have got to check this out.  There have been a few other wrestling RPGs over the years, but none this slick that so captured the feel of a modern wrestling performance.  Even if you're a casual or a lapsed wrestling fan, give this game a try.  The test rules are still free to download, and if you like them then send a few bucks Nathan's way to keep this project going (or follow him on Google +Nathan Paoletta or Twitter @ndpaoletta.  Definitely pick it up when the final version drops - I know I will.
CD Gallant-King Kenny Omega Other Systems Reviews RPG Wrestling